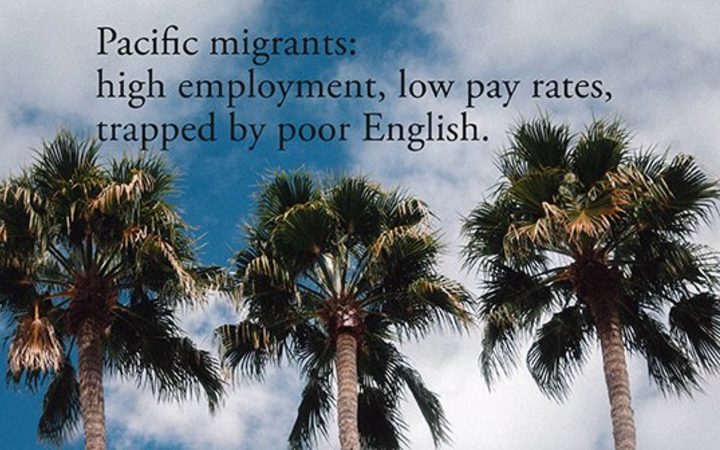 Pacific migrants in New Zealand are more likely to be trapped in low-paid jobs and poor housing compared with other migrants, according to new research.

The study, commissioned by the Ministry for Business Innovation and Employment, interviewed migrants from Fiji, Tonga and Samoa who came to the country between November 2004 and October 2005.

Its lead researcher Isabelle Sin from Motu Economic and Public Policy Research told Nine to Noon that migrants who arrived under the Pacific quota only had to meet very basic English requirements - along with a health-check and a job offer - and that was holding them back.

"They think because they've met the visa requirements, that's enough to live a fulfilling, satisfying life in New Zealand, but that's not enough," she said.

"Once they come to New Zealand - or even before - they need to work on learning [the] English language so they can take full advantage of New Zealand life and economy.

"They need to do more than just come here, and part of it is we are sending the wrong message [that] you can come and flourish here with really basic English.

Six months after they arrived, just nine percent of Pacific migrants were studying to improve their English compared with 40 percent of migrants from other regions, she said.

Dr Sin said those doing worse economically were living in the most crowded of houses, which suggested it was economically driven rather than simply "a cultural decision" to live with family.

Pacific migrants were also more likely to be receiving a benefit of some kind after two years (or when they became eligible).

During the global financial crisis of 2007 and 2008, the rate of Pacific women receiving state help jumped from seven percent to 20 percent and has since decreased slowly to 10 percent.

Despite the fact only a small number of migrants reported their income was enough to live on, about half were sending money back to the islands to their families and churches.

Dr Sin said the findings had caused widespread concern among the Pacific community here, but it was going to require a joint effort by the community and the government to fix the situation.

"I've spoken to NGOs offering free courses to migrants, English as a second language, job-based training. When they offered these to the Chinese and Indian communities, the room was packed. When they offered it to Pacific people, one person turned up.

"People say they are too busy with church and looking after their families, it's a matter of priorities."

Many Pacific migrants were also likely to be working multiple jobs or jobs outside normal hours, which would affect their ability to take up further learning, she said.