Opening a new window into the universe

Dr Nergis Mavalvala is a Pakistani-American quantum astrophysicist who was part of the team that first observed gravitation waves (ripples in the fabric of space time) in a landmark discovery in 2016. 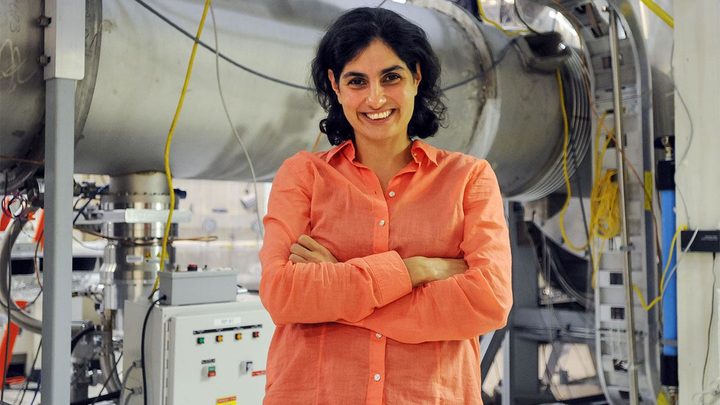 She joins Kathryn Ryan to discuss what it is like to be working at the global forefront of astronomy research.

Mavalvala says a simple way to think about the measurements the are making are to ask what it is a gravitational wave does.

“We’re used to light waves. Those are the lights that come to us from objects that shine, like stars. Gravitational waves, when they pass through the earth, change the distances between objects. If you and I were sitting across from each other in a room and a gravitational wave passed through the midst of us, the distance between us would change by ever the tiniest amount – and that’s the measurement we’ve been trying to make.”

Mavalvala and her team do this by shining a laser beam 4 km into a mirror and measuring the time it takes for the light to hit the mirror and come back. With the speed of light a constant, the team is able to measure interferences in the light's journey.

“Imagine that I drop a huge boulder on the surface of a small lake and you are on a boat a fair distance away. You never see the boulder actually fall, but as the ripples that were caused by that boulder come by, your boat will bob ever so slightly and you will know something must have fallen in another part of the lake.

“Nature has these cataclysmic events like collisions of black holes and neutron stars very far away and we see just a tiny tremor of our mirrors that are due to the waves passing by the earth.”

The equipment runs day and night with sophisticated computer algorithms picking up and alerting tremors that are astro-physical events. The first discovery came in September of 2015 in the early morning when the computers pinged a tremor. Mavalvala and her team saw the data a few hours later.

It was a once-in-a-career discovery, but for Mavalvala and team, it just meant there was more work to be done.

“All it did was make us think we have to work harder because now we know these signals are out there and are waiting to be observed by us.”

Since the first tremor, they’ve seen nine more black hole collisions and observed a rare event of a pair of neutron stars colliding.

Their work has also confirmed one of Albert Einstein’s biggest theories.

“Einstein gave us a completely new way to think about gravity. We feel gravity around us all the time. We jump and we are pulled back down, we throw things and they fall back down. But Einstein told us that gravity had deeper implications when you’re out in space with massive objects. When you get very close to them, space-time starts to curve. We’ve all famously seen these funnels that space-time makes under these massive objects like a star. What Einstein said was that when this star, or black hole, moves – the space-time doesn’t just form a funnel under it, it actually gives off ripples. These ripples, or gravitational waves, carry information about this star or black hole.”

Mavalvala says that when Einstein first saw this, he was dismayed because he wasn’t sure if nature would actually act that way and - in his early papers - dismissed gravitational waves as having no practical purpose because they were so incredibly weak and faint. Over the past hundred years and more discoveries, the realisation came that gravitational waves could be used to better understand the universe.

“When you ask what’s been achieved here, the first is that Einstein was right. These gravitational waves exist and we’re able to measure them. But the more profound thing about these discoveries is that we now have a completely new way of looking into the universe. We can use the gravity of objects, rather than the light they give off, and that gives us very different information. The black holes that we’ve seen, we wouldn’t have been able to see with light – because they’re black holes, they don’t give off light. For me, as a scientist, that’s one of the most exciting things of what’s to come.”

Mavalvala says black holes are an important building block of the universe but until now it’s been hard to measure how many there are, where they are, how they form, how they live, and how they die. Her and her team are now able to start answering some of these questions.

“It really tells us about the expansion history of our universe, it tells us how we got to be, and it will also tell us something about where we’re going next. These are the big questions that humanity has. Everyday we’re going about our lives and may not be thinking about these big questions, but they’re there. They tell us about ourselves.

“We’re just in the moment of time of Galileo’s telescope, it’s just going to build from here until we can continue to observe this new messenger.”