The global scarcity of pilots is forecast to worsen and big efforts are underway here to attract more people to the profession. 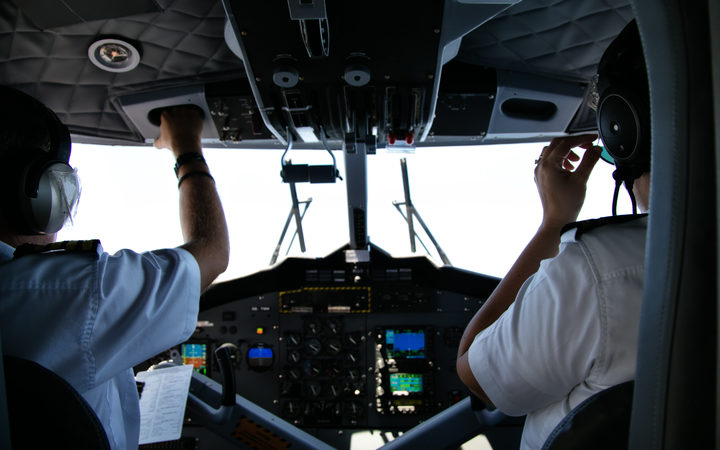 Airlines are witnessing a global shortage on pilots as passenger and service demand grows. Photo: 123rf

There's an estimated shortage of 200,000 pilots worldwide, and Boeing says the Asia-Pacific region will need more than a quarter of a million new pilots over the next 20 years.

Another 500,000 pilots will need to be recruited in other parts of the world in the next two decades.

"We're getting to a situation now where the training numbers and the pilots entering the industry are just not enough to keep up with the growing demand."

The pressure on recruiting was not helped with up to 50 pilots retiring each year.

"You're also getting a number of pilots that migrate overseas to take up opportunities that might be available in other jurisdictions where there may be better terms and conditions available to them," Mr Robinson said.

"Certainly we're not getting enough New Zealand trained pilots through the system and if we don't do something about it airlines and commercial operators are potentially going to have to look offshore and if they can't find pilots there they're not going to be able to man their airplanes."

There were a number of prohibitive factors stopping people from entering the industry, he said, chief among them the more than $100,000 price tag to get trained, and the access to financial help.

The government currently allocates 450 full-time equivalent student loans for pilot training - a number that has not changed since it was dropped from 600 in 2012.

"Each student requires, depending on which school they go to, around about 2 to 2.5 of those student loans for each pilot to complete their training. That only relates to about 160 commercial pilots through the system a year, 160 to 180," Mr Robinson said.

"By the time you look at the failure rates, which aren't high but there is some failures and people who don't complete their courses, we're only looking about a net 80 to 100 commercial pilots per year ... That's just not enough to sustain the growth rates that we're seeing in the industry and the airlines right now."

He said the government has been listening but funding needed to return to 2012 levels, if not higher.

"We need more pilots entering the training organisations and certainly some funding increases in the number of equivalent full-time student loans ... and also the quantum of the student loan we'd advocate also has to increase as well, so there's more access for New Zealanders to get into pilot training."

Around 50 people enter Massey University's School of Aviation each year.

Its chief executive Ashok Poduval said they would be forking out up to $130,000 over the three-year course.

"Young people are wondering if it's worth the investment," Mr Poduval said.

"The government funding has been limited both in terms of the equivalent full time students allocation as well as limiting the amount of student loan that an aviation student could borrow for doing flight training."

There needed to be better pathways to employment after completing training, he said.

"The main reason [for the shortage] I think is over the past years there has not been many employment opportunities, I'm talking about several years ago, it's been creeping up on us," Mr Poduval said.

"They have to go out into the aviation wilderness so to speak to accumulate about 500 hours of flying before they can become first officers or co-pilots on one of the regional turboprops.

"More and more students are reluctant to do that because having invested so much money they've still got to find away to accumulate the experience."

He said Qantas were now offering some graduates a career pathway directly from training into its Jetstar services and a few other solutions were in the works.

"Those options hopefully are coming up as pathways for students and those pathways are needed if you want to attract more people into the profession."

"At Air New Zealand we have about 1500 pilots. We'll take on about 150 new pilots this year and we've successfully recruited those and are well set up for the year, but we do recognise that things are changing and if we don't do things differently in the future we will have that problem."

While it was the company's preference not to do the training itself, he said, it was working on various ways of getting more people into it.

"We're working closely with our unions to try workout a career pathway that we can go into the schools and market as a secure pathway which makes it worthwhile making the investment.

"So I think we need to start with attracting kids into the career so it needs to be seen as something attractive. To some extent that also means convincing their parents that this is a good investment for them to make and there's a secure future."

He said they were also looking at how to bridge the gap between study and people's first job.