Northland Regional Corrections Facility’s arts programme has flourished under Beth Hill, changing from paints on canvas to a rehabilitative career path for prisoners.

Beth - the programme leader for arts, self-directed learning, and living skills at the prison - was awarded the Arts Access Māui Tikitiki a Taranga Award 2018 this month in recognition of her support for the arts, while "taking many leaps of faith to make the projects succeed beyond what was thought possible". 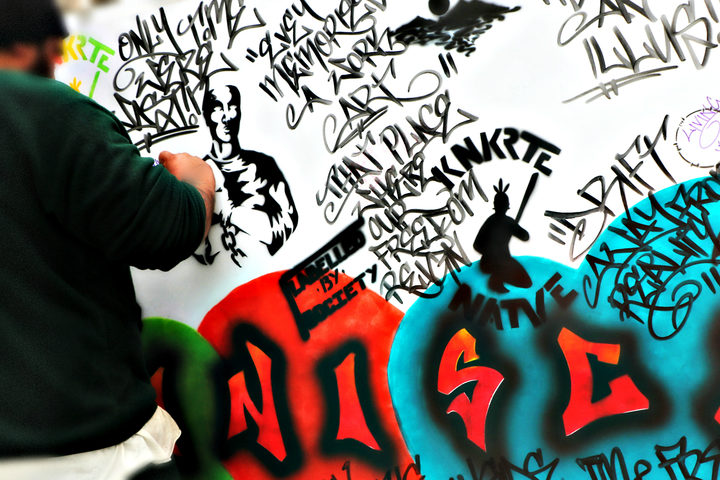 The annual Te Putanga Toi Arts Access Awards are national awards celebrating the achievements of individuals and organisations providing opportunities for people with limited access to engage with the arts.

Beth tells Nine to Noon’s Kathryn Ryan the programme is helping prisoners express themselves in ways they’ve been unable to previously, and giving them skills they can use to succeed in the world.

“One example is a man called Sanity, who is an artist  - that’s his artist name.

“He started coming down to the programme about three years ago, was very shy, found it hard to articulate how he was feeling or to express himself in any way.

“He exhibits and has exhibited in Whangārei art gallery, at Village Arts over in Hokianga, at many other exhibitions including [in] Auckland, and that work has been koha to charitable projects,

“As a result of joining the programme he’s grown in confidence, he’s also grown in terms of his creative output, so he no longer just draws.

“His plan is to build a small recording studio on his whānau’s land on release and keep making his artwork and have a small T-shirt business.”

She says the voluntary programme has changed from being a constructive activity to a full reintegration programme.

“A battle that’s been fought really hard by myself and the management team.

“Not everybody on site wants to be involved but the men who do, they don’t leave, they stay involved in the arts until release.

“We try and support them to continue with their arts either as a hobby or career or just utilising the lessons they’ve learnt with whānau in the community.”

“I always find it quite amusing, we’re working in a prison environment but we’re encouraging the men to break rules that they had put in their heads when they were children with regards to arts

“In breaking those rules funnily enough I’m hoping it’s going to enable them to follow the rules of society and make a difference themselves when they get out there and support safer communities and be mindful of victims of crimes.”

She says as well as visual arts, the programme includes performing arts, music, and - at the young adult unit - cooking.

“Shakespeare behind bars has been renamed to Redemption Performing Arts, the reason for that being that we felt that the Shakespeare in a way was blocking some people from wanting to come and participate or even come and watch the performances.

In visual arts too, it’s about more than just paints on canvas.

“We have projects where we work on site creating murals and creating spaces within the prison for people to appreciate the art but also to share in the tikanga values of the site through visual arts.

“Like any other artists I keep telling people you’ve got to have really sustainable practice - you’ve got to get good at using and making your own tools, looking at recycling and that for them was a bit of an eye opener.

“Before it was just painting on canvases ready made, whereas now we will just make art from anything and everything we can find.”

Part of the teaching is also about knowing who they’re teaching.

“Most of our learners on site are kinesthetic learners so, you know, they’re not people who are going to want to sit down to listen or to watch something to learn, they want to actively be doing to learn.

"We have exhibitions, we have workshops, we reintegration reach-out events where we bring whānau and local community in, give them an opportunity to have pro-social experiences , which for some men who’ve been in for a number of years they’ve never had before.

“They become quite institutionalised, so by bringing external people into the prison environment and having these beautiful performances or art exhibitions or opportunities to share ideas, it builds confidence." 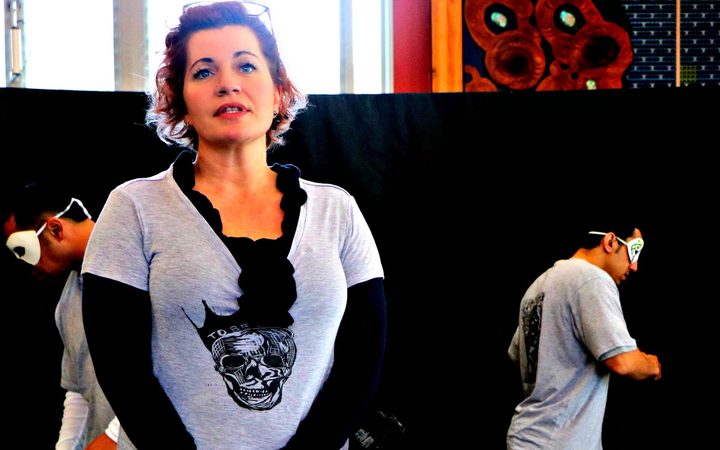 The arts are often a gateway to other forms of education, she says.

“People who haven’t been very successful at school or never finished school or lacked confidence in schooling will then take part in the arts programme and find a new way of expressing themselves.”

Beth’s been running the programme for about three and a half years, having started working in it with a lecturer from her applied arts degree.

“It was terrifying to be honest with you, for a lot of people who haven’t stepped into a prison environment it’s quite intimidating.

“But I arrived and was so surprised at how immediately I felt at home like this is somewhere I belonged.”

She says it’s required a lot of hard work.

“As soon as I took over the programme, having seen how hard my predecessor worked, I realised I was going to have to donate a lot of time and put a lot of hours in.

“With the arts in any environment it’s always going to be bottom of the pile in terms of getting money to get projects off the ground or to get people to take it seriously. It’s often seen as fluffy.

“I worked 50 hour weeks plus doing work outside the prison, some of my time has been donated, I’ve had to do the job sometimes maybe of three people in a week, creating opportunities through exhibition, bringing people on site, teaching, assisting people wanting to do arts programming."

The focus on rehabilitation is also helped by the facility itself, she says.

“We’re a corrections facility, so it’s very much about rehabilitation on this side and reintegration as opposed to being a maximum security prison.

"So that gives more freedom of movement and very often the difficulty we have is finding space.

"I think on the whole, the site here works really, really well as a team and the men embrace every opportunity and it just becomes part of who they are, it’s about walking the walk, talking the talk."