A row over 48,000 seedlings ordered to be destroyed or contained could embroil the Ministry for Primary Industries in another costly court battle.

Five nurseries or orchardists said the Ministry's behaviour was costly and unnecessary and have filed court action, seeking a judicial review of the Ministry's actions. 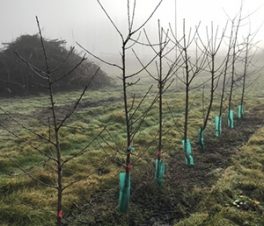 The seedlings at the heart of this case were mainly apples, peaches and apricots.

They included new varieties of fruit, and were being developed for the market by New Zealand growers when their status was frozen by the Ministry.

Their biosecurity status had been authenticated by a facility in the United States, the Clean Plant Centre North West, which is sited in Washington State.

An audit of this facility found missing and contradictory information, and so the Ministry for Primary Industries withdrew accreditation.

It then ordered 48,000 seedlings to be either contained or destroyed.

But nurseries said that many of the containment rules would be onerous.

In some cases, seedlings would have to be held in buildings with concrete floors and fine mesh across windows - with a 0.6 mm gap - to keep out insects.

Many nurseries said this would be much too expensive, so a lot of the cuttings would be destroyed out of economic necessity.

They said this would destroy the benefits of six years' work spent developing new fruit varieties.

The court action has been filed by five orchards or nurseries mainly in the Hawkes Bay region. They are Johnny Appleseed Holdings, McGrath Nurseries, the New Zealand Fruit Tree Company, Pattulo's Nurseries and Zee Sweet.

The want the Ministry's order to be overturned, or at least modified, so it could gather all the relevant facts.

The Ministry should act with due consideration and take a common sense approach, they said.

The five plaintiffs said some of the seedlings had been in New Zealand for six years and had shown no sign of disease.

In its most recent statement, the Ministry agreed that no trace of serious diseases had been found among the cuttings.

But it said it could take no chances on biosecurity.

If this case leads to court action, it will open another front for the Ministry, which is fighting Kiwifruit through the courts over a PSA claim worth at least $450 million.