Mike Dickison is about to become New Zealand's Wikipedian-at-large.

Dickison is natural history curator at Whanganui Regional Museum and has for many years been a passionate advocate for the online encyclopaedia. 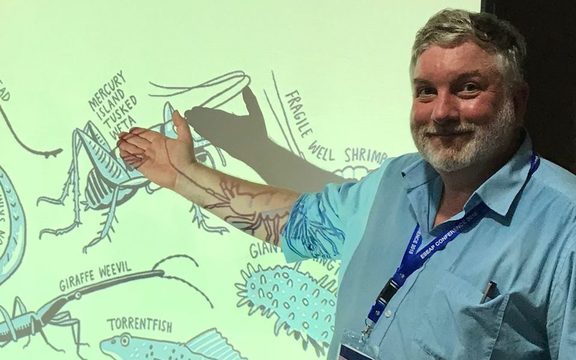 He’s written and edited entries about New Zealand and encouraged and taught others how to become editors.

His one year role came about when he applied for a grant from the Wikimedia Foundation.

The foundation – a US non-profit that set up Wikipedia and other projects such as Wikispecies and Wikimedia Commons – fundraises each year and uses some of the money  for outreach and promotion.

Dickison trained as a scientist at the University of Canterbury, where he says some lecturers were telling students not to look at Wikipedia - “which seemed crazy to me” – and others were setting students to write Wikipedia articles instead of essays.

He says the coverage of New Zealand was pretty bad and later, in Whanganui, he set up a community editing group that met once a month, with the aim of improving coverage of the region.

Dickison approached institutions around the country offering to work with them for a few weeks to help get their resources into the public domain.

Next month he’ll be at Auckland Museum, which he says has an image collection available under open licence. “All we’ll need to do is migrate them over to Wikimedia Commons and then they can start popping up on Wikipedia pages.”

Dickison, a biologist, says many critically endangered New Zealand species have no Wikipedia entry and he’s keen to improve the coverage of flora and fauna of New Zealand.

Kauri dieback disease had been a problem for years, but no one had thought to put up to date information on Wikipedia, he says. “All it took me was half an hour to [create a page] and immediately people started zooming in and adding information.”

His mission is to persuade institutions to open up collections rather than holding on to them in the hope of making money down the line. ”That will have a flow-on effect, people will then come in and start to engage with the museum and its collections in a ways they hadn’t even anticipated."

But he won’t be sitting there editing Wikipedia pages, he says. The idea is to help organisations engage with Wikipedia, and help the public get involved.'

“[Organisations] can’t go round fixing up their own Wikipedia pages and making them look better to help with their marketing.

“But what they can do is they can try and engage with all the volunteer editors that are living nearby, support them, and encourage them to turn their attention to some of the institution’s pages.”

Guidelines and policies developed by Wikipedia can be a daunting, he says, so he’ll help set up support groups for editors.