From the clean Nashville sound of Jamie McDell, to the weathered voice and humour of Bernie Griffen - RNZ Music's Kirsten Johnstone samples the latest country offerings from our neck of the woods. 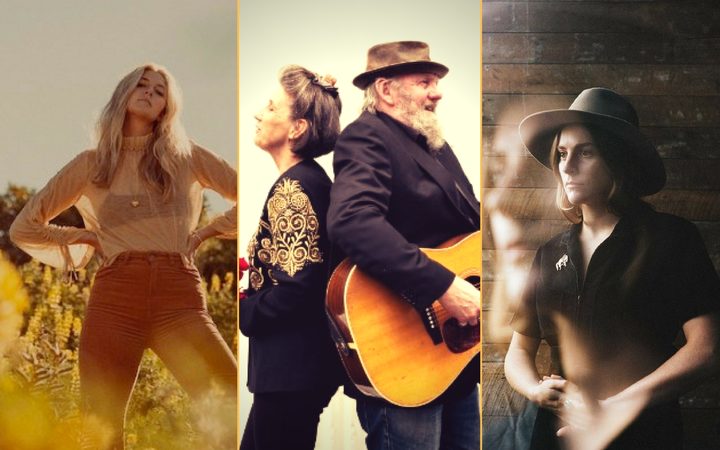 The weather’s getting cooler and country music is like a cracking fire and a cup of tea for me: warm, soothing, and nostalgic.

There’s a lot being released in NZ right now, running the gamut from clean, commercial radio friendly country, to well-worn, almost falling apart at the seams country. Here are some of the highlights.

Jamie McDell has a pretty huge following in NZ already, but her music has been more studio produced and angled for the pop market in the past.

She’s only 25 but was in Universal Music artist development by 16, they put her in York Street studios with a house band when she was 19, and the resulting album, Six Strings and a Sailboat, took out best pop album at the Tuis in 2013.

McDell grew up in Mangawhai, surfing, playing guitar around bonfires, listening to John Denver and James Taylor along with her younger sister Tessa, who is also a burgeoning singer-songwriter. They released an album together in February under the name Dunes.

Her 2015 album had the media calling her New Zealand’s answer to Taylor Swift - but rather than doing a ‘shake it off’ move, she’s followed her heart more toward country with this third album which comes out Friday.

She’s spent the last year living in Nashville, and Music City’s obviously rubbed off on her.

Extraordinary Girl was recorded over there with Australian record producer Nash Chambers - brother of Kasey Chambers, who sang backing vocals on 'Tori' - the whole family is country music royalty.

These songs seem somehow more relaxed, more authentic than I’ve heard her before. Maybe it’s just that she’s older, perhaps wiser, but also that she’s only used acoustic instruments in the recordings. This is a much truer country sound and I think that’s where she wants to be. I don’t feel like she wants to be a big pop star - she’s a down-home girl at heart who just likes to tell stories and have a connection to her fans.

There’s a Dolly Parton-esque feel to a song like ‘Tori’ - maybe it’s just the fact that it’s a woman writing a song for another woman, and the specificity of the lyrics. McDell says:

“I wrote this song on a spring afternoon sitting at a wooden desk in Inglewood in around ten minutes. I was reflecting on an old love of my partner's and the lyrics and melody started to flow. I admit - I was nervous to release something so factual, but I’ve never been one to go back and edit my music once I’ve completed a song, so it is what it is.”

McDell and band play Auckland on Friday 4 May, Whangarei on Saturday 5 May and Christchurch 11 May with support from The Miltones and Holly Arrowsmith.

Holly Arrowsmith - A Dawn I Remember

Holly Arrowsmith will release her crowdfunded second album A Dawn I Remember on 22 June.

Arrowsmith was born in Santa Fe, New Mexico but her family moved to Arrowtown, near Wanaka when she was a child and you can hear the mountains in her songwriting - the rich landscape imagery is constant, and there’s something pretty Appalachian about the modal melody of the single ‘Farewell’.

It’s a love song to her hometown, and indeed it was half written as she was driving away from Queenstown to move up to Auckland.

She headed to the far south to record the bones of this album, packing into a crib in Colac Bay for a couple of weeks and then finishing it off at The Sitting Room in Lyttelton with engineer and producer Ben Edwards (Aldous Harding, Marlon Williams, Tami Neilson, Delaney Davidson).

Here’s another Ben Edwards co-production which isn’t solely country, but runs from brassy retro-soul to latin tinged exotica, rockabilly to straight down the road country ballads.

There’s songs about fallen heroes of hers: soul singer Sharon Jones, and Glen Campbell, and one that is obviously an ode to Bobbie Gentry.

‘Stay Outta my Business’ lyrically is a battle cry for mothers everywhere.

Rolling Stone called it “a crackling, hand-clapping soul vamp that would do Amy Winehouse proud for its swagger and defiant self-reliance.”

He’s been involved in the rise of some of our biggest stars (Tami Neilson and Marlon Williams) and collaborated with long-established names (Neil Finn, Barry Saunders.) Yet his solo persona remains that of a loner, an odd tramp-like figure hovering on society’s margins. As the motto on his website reads, ‘Part wandering minstrel, part-travelling salesman’.

Shining Day, Davidson’s new album, is stacked with good hooky songs, some of which fall on the pop side, others closer to country, all filtered through Davidson’s lo-fi sensibilities and rasping carnival barker’s voice.

Eb and Sparrow tend to be categorised as an alt-country band and there are certainly country traces in Eb Lamb’s melodies and in a line-up that favours twanged guitars and sweeps of lap steel. But with this album more than ever, they are more like the kind of country band you would find in a barroom scene if David Lynch set a film in the American south.

In a great track like ‘Working’, Lamb rises out of the mix like some ghost of Patsy Cline; a lost B-side on a haunted jukebox. Yet in those moments where the tempo picks up, the mood remains just as restless and lonesome.

The sentiment of Bernie Griffen’s new single ‘My Brain Exploded’ song is Cohen-esque: it’s taking on old age with a wry humour, lamenting his lack of focus, his ailing body, his habit of getting lost. It’s charming.

“You’ve been asking questions of my behaviour / I feel like a body full of swollen glands. You laugh and cry and look at me / Love and doubt and fury in your eyes / Why can’t you be, a steady man/And all I can do is sigh."

He has emphysema. His voice isn’t strong, but like Johnny Cash, it’s lived in, gravelly like a country road, rugged like the Southern Alps, harsh like a bottle of Moonshine. But his honest lyrics shine through, and the music played with poise.

Griffen has a history of drug addiction and credits music as his life-saver. He’d always played music but was very shy, but he wanted to be in the music industry, so after his career as a fisherman he started a record label - Global Routes. He recorded his first album aged 60, and wrote a song that we’ve played many times on RNZ - ‘29 Diamonds’ for the Pike River miners.