Huge stockpiles of rubbish are building up around the country as councils work out what to do with it.

China recently stopped accepting 24 different types of waste including plastic and paper because it said contaminants were polluting its environment. 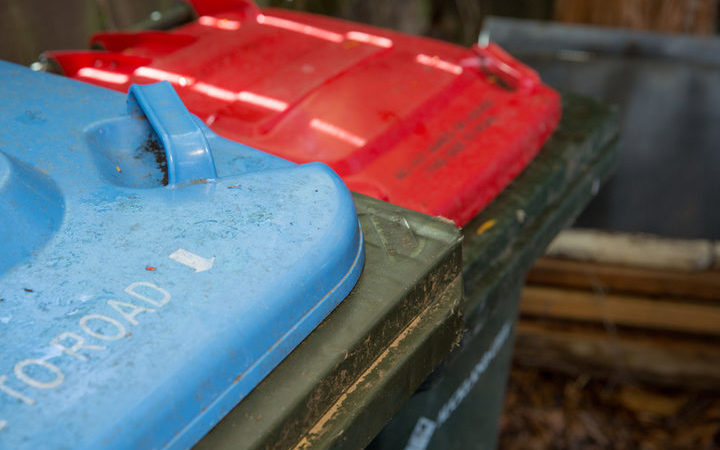 New Zealand previously sent most of its recycling to China.

Spokesperson Graham Christian for waste company Smart Environmental said paper and plastic stocks had started to build up since the ban.

"The paper's sitting under cover in big warehousing and the plastic unfortunately is sitting out in the open environment," he said.

"We do have to make some decisions soon about what we will do with it. We'll need to talk to our partner councils about leasing space at a shared cost to store the product."

Mr Christian said the price for most recyclable goods had halved since the ban, but some products were worth nothing or even a negative figure.

"Let's say the average long-run value of a tonne of paper is $150 - currently it's at $60. Cardboard had historically gone up to $130 and currently it's around the same value [$60] and mixed paper is at zero, so each time we touch it we're adding cost."

He said getting rid of rubbish in areas without a port cost more because it had to be handled more times.

"Areas like Grey, Buller, the West Coast and also in the East and Waikato like Thames-Coromandel we received products from eight different councils and we are sitting on a very significant stockpile there."

He said other Asian countries were accepting waste, but New Zealand was competing for space with larger countries like the US and Australia.

"They're being swamped by other countries and we're in a queue essentially."

Mr Evans said with a commitment from government the country could set up its own internal systems.

"We need to stop thinking about how we stop being prone to fickle overseas markets with low commodity prices and how we actually use more of this material in New Zealand," he said.

"That requires a commitment from local government and government. If you invest in a significant amount of plant to process this material, if prices come back overseas and everyone runs away to those to get the better price that puts the industry in a real challenging position."

He said harsher product stewardship regulation would help bring down the amount sent to be recycled in the first place.

"Currently, brand owners can make whatever the heck they like, put that out to the market and say 'it doesn't matter to me how that's recycled - I'm not going to bear the cost of it'."

Wellington City Councillor Iona Pannett said increasing the waste disposal levy from $10 per tonne of waste dumped at a landfill would also be effective.

Ms Pannett said it could go up eventually to $200 a tonne.

She also said harsher regulations on selling products made with unrecycled plastic would incentivise manufacturers to be mindful of their waste production.

"The government could mandate and say plastic packaging has to be recycled. The problem is that virgin plastic is cheaper and much easier to use."

She said the issue with waste stockpiling, was a good problem to have.

"It will provide the opportunity for innovation."