The leadership of change: Mary Robinson and Jacinda Ardern

Their conversation ranged from Northern Ireland, the US and China to child poverty in New Zealand and climate change, and was facilitated by Nine to Noon’s Kathryn Ryan at the Aspiring Conversations event in Wanaka. 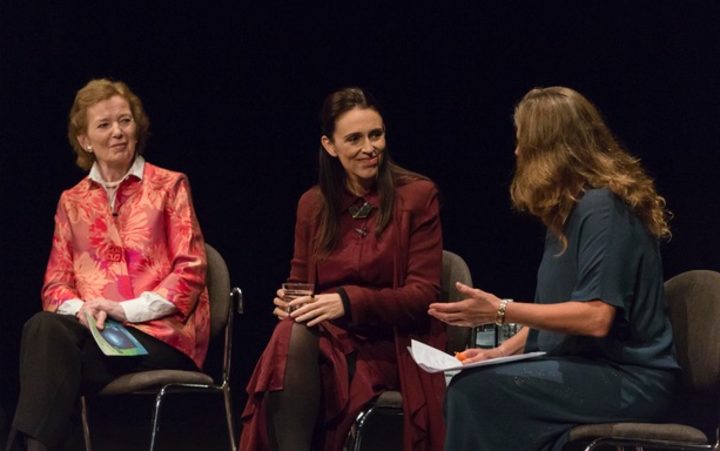 On Northern Ireland: “There were many, many hands to that peace… Women came out of their housing estates to stop their young being kneecapped. They were sick of it, sick of the violence, and they met each other, tentatively. The men didn’t… Americans were helping, Europeans were helping. It’s hard to make peace, it’s grindingly difficult and it’s slow.

UN’s 2030 agenda for sustainable development: “Leaving no one behind, and even prioritising the furthest behind first … that is still the agenda for the world… Somehow, we mustn’t forget that.”

Climate change and a just transition:  “[We’re making the mistake of] forgetting those who are working in coal, in gas, in oil, specifically. The rust belt that elected Donald Trump, they were forgotten by the Democrats…  If a whole sector is forgotten and left behind they will vote for somebody who will promise anything, and there are populist promisers out there.”

New Zealanders: “[We] believe in fairness, we believe in those old notions of there being equality, so for me it’s driving for better because we’ve had it before and we can have it again.”

Constraints on change: “It’s the political distractions that deter you from the path, they side track you… When I think about the things I’m excited about, it’s the fact that we have this opportunity to bring New Zealand on to a path that will last beyond three years that will go beyond me as an individual politician … because the challenges we are facing right now, like climate change, they are not three year problems.”

Child poverty: “I’ve yet to meet a parent who doesn’t want better for their child than what they had. My theory for change is providing the support that makes that happen. We can’t look past low incomes, because that’s what drives our child poverty rates.”

Climate change: “For [Samoa, Tonga, Niue, the Cook Islands] it’s not a hypothetical, it’s not something in the future, it’s happening now… We have a regional obligation and a regional sense of responsibility. We are not neighbours of the Pacific, we are the Pacific.”

Pace of change: “Three years can be very short …We have been moving at pace and there is risk in that… I do want to bring people with us because I think that’s how you create lasting change but I’m also in a hurry because so many of the things we’re trying to do can’t wait.”