Another day, another America's Cup plan

A fourth option modelling what an America's Cup Village in Auckland might look like has arrived today as a planning deadline nears with no agreement in sight.

Waterfront land owner Viaduct Harbour Holdings wants most of the eight team bases built on Wynyard Harbour, without the wharf extensions needed in other plans. 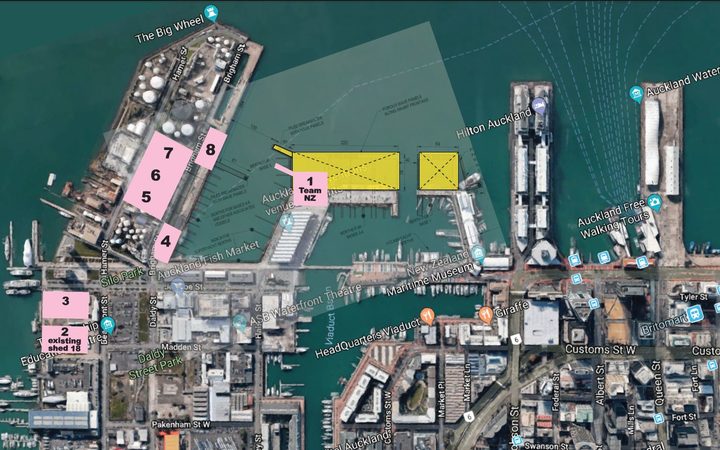 Chief executive Angela Bull told Nine to Noon that while it would benefit from not having a series of rowing team buildings on wharves, public spaces would gain the most.

"Public parks, promenades and walkways have all been very carefully planned over the last 20 years, and those are views that would be disrupted by having a wall of 15m-high buildings and new structures into the harbour," she said.

The company will submit its views to the Environment Court hearing due to consider an application for a Resource Consent to build a village.

Public submissions were due to close next Wednesday on a plan for the America's Cup bases, agreed in December between Auckland Council and Team New Zealand.

However those were likely to be extended because there was yet to be final agreement between the council, government and the cup defender on whether changes would be made.

A "hybrid" proposal driven by the government's lead minister David Parker was released jointly with Auckland mayor Phil Goff last week, but its final status was not yet clear.

It involves a 40m - rather than 75m - extension of Halsey Street Wharf, with more of the bases built on nearby Wynyard Point.

Team New Zealand is understood to regard the five-base layout on Wynyard Point to be unworkable, and has proposed its own variation which officials are now considering.

Timing is critical, with officials hoping planning consent can be given by August, allowing bases to be built before the summer of 2019/20, to accommodate teams arriving a year before the regatta.