Christchurch is trialling using only compostable or recyclable products at events, but the co-ordinator wants New Zealand to adopt labelling regulations for compost and recycling.

Christchurch City Council's sustainable events coordinator Shanti Campbell told Nine to Noon the programme was trialled at several events in the past year had already diverted 23 tonnes from the landfill. 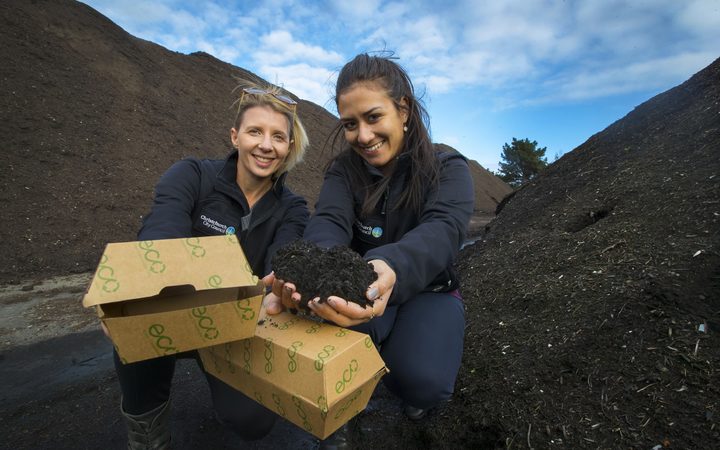 "In February 2017 with three events, which was over 10 days and 190,000 attendees - which is just under half of the population of Christchurch - and for those three events we diverted 61 percent of the landfill away to recycling and compost," she said.

"And recently in September last year we had trial 2.0 and since then we've had ... about seven events take place so far and we are sitting on an average of about 75 percent diversion at the moment, but those numbers are going up and down as we're fine-tuning the trial."

She said Christchurch had an organic composting facility that could only compost organic products, as it would then be sold on for gardens.

"Currently at this stage if it's compostable it has to break down within 90 days, and it has to be - in this case in Christchurch - all of the compostable products have to be organic so they can't have any bioplastics or new technology like that at this point."

Labelling was a problem too. While there were regulations in other countries over how materials could be described - as compostable or recyclable - that was not the case in New Zealand.

"At the moment there's lots of compostable products out there on the market which contain elements of non-organic materials ... in that case we can't actually take them.

"It is a really mammoth task to be able to regulate these and that's something that sits outside of Christchurch City Council, it is a wider New Zealand issue that needs to be addressed."

She said New Zealanders were very trusting of labelling, which made it particularly difficult.

"If they see there's a packet that says 'I'm recyclable' or 'I'm compostable' or 'I'm biodegradable', they take it as gospel truth and really they haven't really looked into it.

Christchurch's rules were being trialled on an opt-in basis for event organisers but the inconsistency of labelling was catching out food and drinks vendors as well, making preparing for the events a difficult process.

"A lot of food vendors say 'well, I bought this box and it has a green tick', or a green tree, or a green leaf, and I feel really sorry for these people because they've spent a lot of money on these products and I have to turn around and say 'we can't actually compost these here in Christchurch'.

"We sit down with them, we go through the process, we help them through it. We train their vendors, we go on site and we audit the vendors' food packaging on site so we make sure that there's no contamination of food packaging coming in."

"Then there's bin staffing as well in some cases, as well as waste sorters back of house - that waste, [they] sort through piece by piece."

She said food safety could sometimes clash with recycling efforts, with the lining on coffee cups that ensures safe consumption making them unable to be composted.

No matter the problems though, the council was trying to be as open as possible about its process with the waste sorting happening on site at the events as well.

"Because we want the attendees in Christchurch to learn how to recycle and compost but also see the effort that we're making and see what it takes to actually make sure we can compost the waste from the event.

In particular, it was about educating people about what could be recycled, what couldn't, and what to do when you're not sure: put it in the rubbish.

"Even with your home recycling, if you're not sure whether it's recyclable or not, the best thing to possibly do is actually to just put it in the landfill because if you do put it in your recycling you may contaminate your load and your neighbour's loads as well."