Beatrice Fihn: Nuclear war only 'a tantrum away'

Humanity faces a stark choice – either we put an end to nuclear weapons or they end us, says Nobel Peace Prize-winning anti-nuclear campaigner Beatrice Fihn. 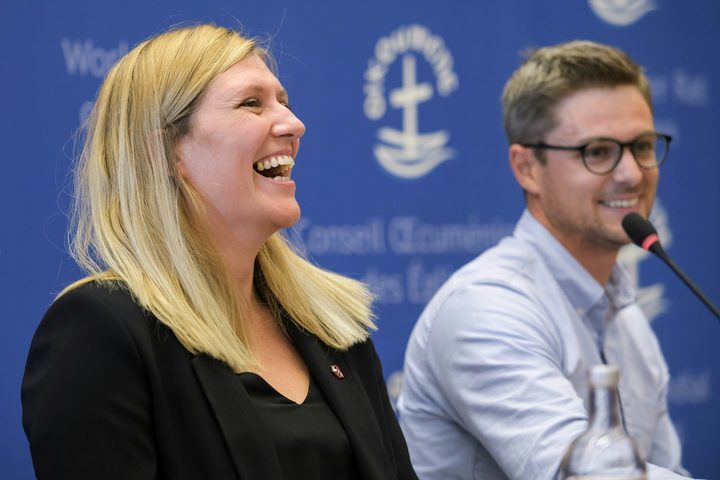 2017 has been marked by a rise in tension between nuclear powers – in particular the United States and North Korea – and nuclear war is only a “tantrum away”, Fihn said as she accepted the Nobel Peace Prize in Oslo last week.

The spotlight is back on nuclear weapons now, she tells Kathryn Ryan.

“We forgot about these weapons, we forgot to ban the bomb in a way and now we have to mobilise people from around the world to finish the job and end them before they end us.”

The idea that the assured mutual destruction of nuclear warfare kept the world stable was always a myth, she says.

“We were so close to nuclear disaster during the Cold War and more and more research is coming out about exactly how close we were; with misunderstandings, accidents, presidents that weren’t really sane at certain points – so we were much closer than we thought.”

Sheer luck has saved us so far and the situation now is more volatile, she says.

“Today we have a whole new situation, with many more nuclear-armed states, we have terrorists, we have cyber-attacks, we have all these different dimensions and regional conflicts that just make it more and more unpredictable.”

Nuclear weapons fuelling the tense situation on the Korean peninsula are an example of that, she says.

Fihn is executive director of the International Campaign to Abolish Nuclear Weapons (ICAN) – a coalition of hundreds of NGOs that was a driving force behind the first international treaty banning nuclear weapons at the United Nations this year.

ICAN developed the treaty over ten years with the UN, the Red Cross, academic institutions, researchers, relief organisations and survivors.

If passed, it will prohibit the use, threat of use, possession and development of nuclear weapons.

So far, 53 countries have signed the treaty, but only three have ratified it – all of the world's nine known nuclear powers voted against.

Nuclear powers put direct pressure on nations who intended to support the treaty, she says.

The treaty would work to stigmatise possession of nuclear weapons.

“Right now it gives [countries] status, they're even called 'nuclear powers'. We need to stigmatise these weapons, make them shameful.

“Nobody brags about having chemical weapons.”

The chance of nuclear weapons being used, at some point is a certainty and their destructive power is enormous, she says.

One US nuclear submarine has seven times the explosive power of all the bombs dropped in World War II, including Hiroshima and Nagasaki.

“It’s just an enormous amount of explosive power. There aren’t even that many people to kill on the earth.

“If we keep nuclear weapons forever they will be used, so we have a choice. Either we end them or they end us – what’s it going to be?”