Twins Rachel and Jeremy Hall are bringing the beats of the Pacific into the digital age with the Patō – an electronic log drum inspired by the traditional Tongan lali. 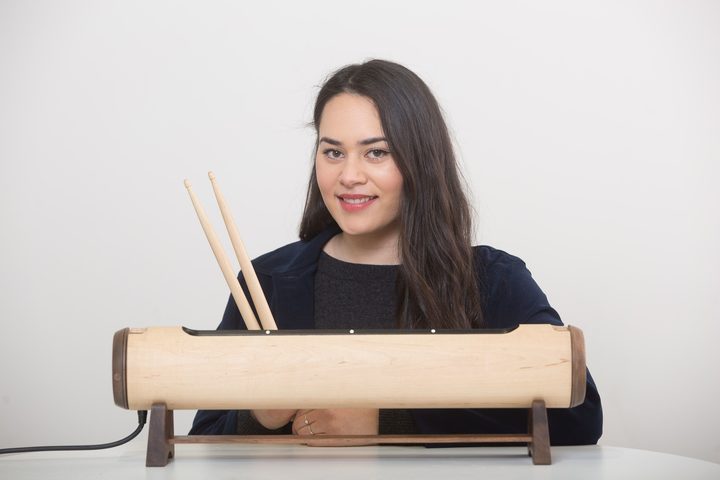 Industrial designer Rachael designed and handcrafted the drum partly to help her brother Jeremy – a professional drummer based in London – incorporate their Tongan culture into his musical life.

Rachael – also a violinist – wanted the Patō to sound as close as possible be to the "beautiful distinctive sound" of a traditional Tongan lali.

"I wanted to make it more relevant and bring it into the modern music scene today."

Her Tongan family in Wellington helped her design the Patō during her Honours in Industrial Design at Massey.

She first made a lali of traditional palm wood with her uncle, but the Patō is made from maple, which has a more even grain to keep the sound consistent along its length.

A channel runs inside the body which tapers out at 5 degrees – the sound Rachael liked best after experimentation – and mother-of-pearl inlays work like a fret board.

Inside the Patō is a pitch adjuster made from polyutherane resin that you pinch and move.

"I just wanted a beautiful blend of tone, attack [the initial phase of a played note] and body."

Patience and pushing through are a very big part of design, she says.

"That's the fun of it, as well, though. You learn so much along the way and you never end up designing what you think you will to start with."

Jeremy – who is also a composer and producer – hadn't played a lali before.

The first time he had a go on a Patō, it sounded good before he even plugged in, he says.

He'll now incorporate the drum into his compositions – playing it through an amp and using it to create effects.

"It's just a really good instrument," he says.

This year, Rachael won the prestigious Red Dot Design Award and was a national finalist in the international James Dyson Award for the Patō.

Next up, she wants to refine the drum, then get it manufactured in Tonga and onto the commercial market.

Requests from people wanting to buy it and play it at music festivals are flooding in, she says.

"I don't think there are many instruments from the South Pacific in the modern music environment today."