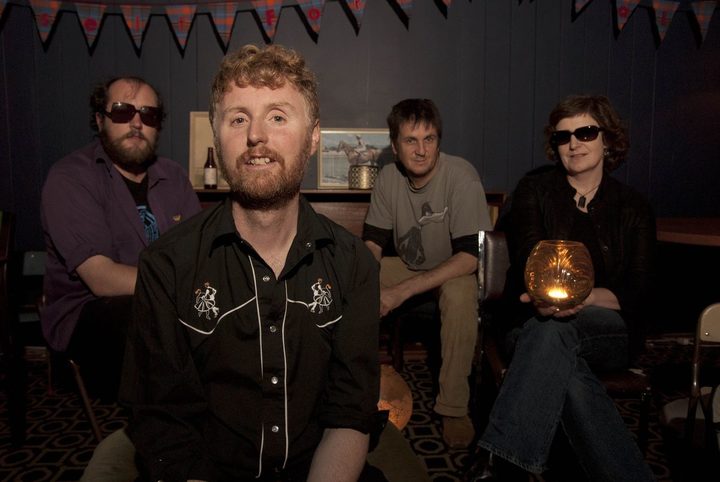 As they used to say in the cheese ad: Good things take time. Sometimes quite a long time, as it happens.

From idea to execution, from production to distribution, it can be a long road, and so it was with the vinyl edition of Penguins Ate My Chips, the fourth album by Wellington band, MarineVille.

Initial recordings took place in a Newtown warehouse in 2011 under inauspicious circumstances.

“It was nestled between a local gang headquarters, an animal sanctuary and a methamphetamine-crazed neighbour who threatened to beat up the band,” recalls frontman/ guitarist Mark Williams.

“He was later arrested for driving around the local suburb on a child’s motorcycle whilst waving a sawn-off shotgun.”

Now based in Berlin, keyboard player Jeremy Coubrough was sleeping in the place at the time. “He would crash out at night under the studio ping pong table. The kitchen in that place was a real health hazard, but we got down some pretty good songs in the end.” 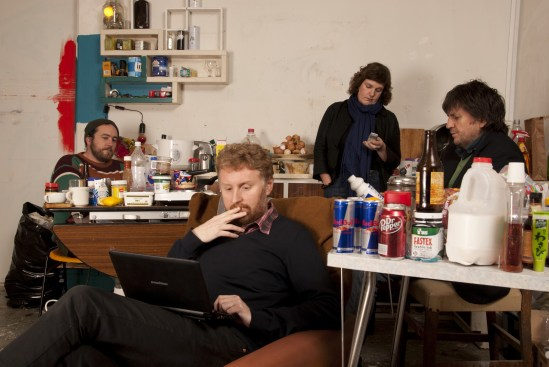 Those songs were later mixed by Otago audio legend Forbes Williams in Dunedin, where Williams and several other members once lived, and then, well… nothing, really. Several more years went by before the album slipped out quietly in 2016 via Williams’ cassette/download label, Burning Log.

That might have been the end of it - another fine local record disappearing unheard into obscurity, but the album caught the ear of Arno Loeffler, a New Zealand music obsessive based in Austria.

Loeffler has previously released albums by Jay Clarkson, Robert Scott, Bill Direen and Seafog, among others, and recently slapped out Penguins on vinyl through his European label, Zelle Records.

“I first met Arno ten years ago during one of his many visits to New Zealand,” Williams told me via email. “Then three years ago I toured Europe playing guitar with Bill Direen and The Bilders, and Arno came along as photographer and recorded every show. The guy probably deserves a medal for services to NZ music, or at least a South Island passport.”

I met Loeffler myself recently as he passed through Nelson on one of his sporadic whirlwind trips to Dunedin, the city he considers the epicentre of the Aotearoa indie music scene.

He sang MarineVille’s praises over multiple foamy pints of IPA. “When I first listened to the tape, I thought- Wow, this is so good, someone just has to put Penguins out on vinyl! It could be an instant Kiwi classic.”

I’m inclined to agree. Certainly, Penguins is a brash, lurching, agreeably ramshackle record that deserved far better than simply getting lost down the back of our cultural sofa.

Eleven songs hurtle by in just 26 minutes. The playing is brisk, artful and surprising, which is understandable, given the diverse backgrounds of Williams (guitar, vox), Coubrough (keys), Greg Cairns (drums), and Denise Roughan (bass, backing vox).

Indeed, music hack convention dictates that I must call these guys an “indie supergroup” due to the individual members’ past pedigree in other bands, among them such underground sensations as Constant Pain, The 3Ds, Look Blue Go Purple, Bad Statistics, The Bilders and Cookie Brooklyn & The Crumbs.

Everyone plays to their considerable strengths here. Coubrough’s keyboard parts channel the sparky energy of The Modern Lovers’ Jerry Harrison, back before he left to join Talking Heads, and an air of unhinged desperation informs Williams’ vocals and guitar on many songs, which sometimes evoke Pere Ubu. 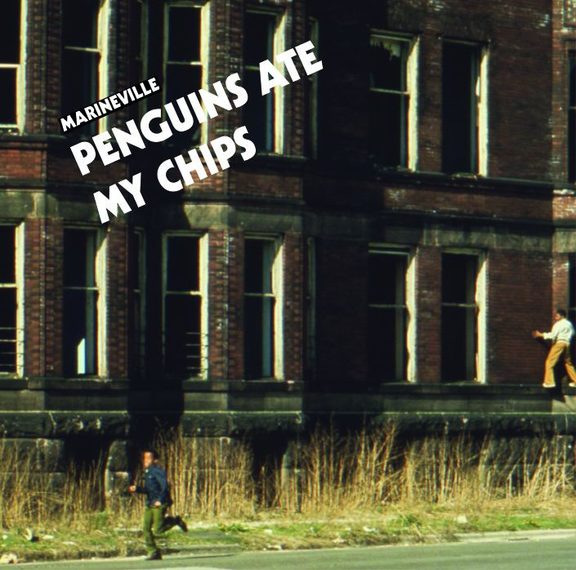 Album standouts such as 75 Watt Frosted have the raw hypnotic churn of Noo Yawk art-punks Suicide, or our own drone-rock legends, Snapper.

A skillful postmodern pickpocket, Williams also scatters knowing references to other “spastic, groovy and wordy” bands (Television, E.S.G., The Shaggs) throughout the work he does here, and with his other band, Cookie Brooklyn and the Crumbs, a collaboration with Nell Thomas and Erika Grant from Orchestra of Spheres.

But besides a thorough grounding in underground indie music, what makes Penguins Ate My Chips special is its open-hearted approachability; pick any tune at random, peel back some of the noise and you’ll uncover a meaty pop melody.

Growing up in South Dunedin, Williams was weaned on the commercial AM radio stations his mum played “all day, every day” at home. The first cassette he bought with his pocket money was Duran Duran’s Arena, he tells me, a band who struck him as “impossibly sexy and exotic”.

Williams took to wearing one of his dad’s old squash wristbands in emulation of Simon Le Bon, thinking this might help him meet girls. Dunedin remained unimpressed.

I, however, am deeply impressed with this record, and that pleasure’s undiminished by the fact that this sturdy wee collection of songs took more than six years to make it from that heroically unhygienic recording studio to my grateful turntable.

A rugby commentator would undoubtedly say that Penguins Ate My Chips had done the hard yards. From Wellington to Dunedin to Vienna, then back to New Zealand again on crispy black vinyl: these songs have clocked up some serious air miles to get to your ears. The least you can do it take a listen.