Black Ferns finally get their celebration. Is it enough? 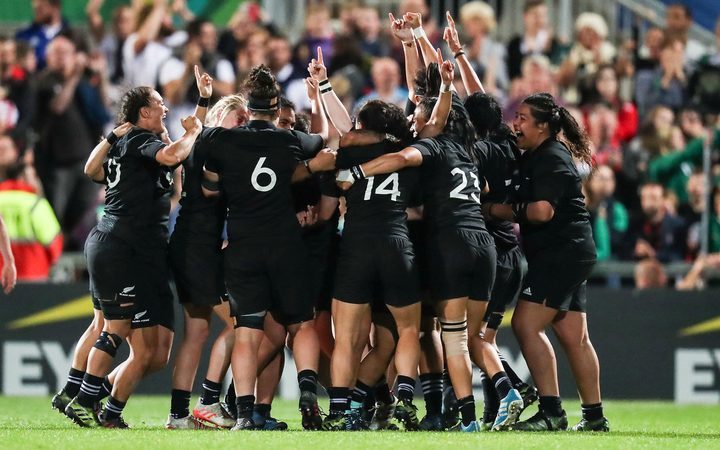 And the Players Association says it will be seeking negotiations with New Zealand Rugby over some of the financial and support issues the amateur team faces.

A victory event for the Black Ferns, who won their fifth Women's Rugby Women's Cup in August, is being held in Manukau today - the first time an official celebration has ever been organised for the side.

That's despite the women's side having a better track record than their male counterparts, and is in sharp contrast to the multiple victory parades organised for Team New Zealand in the fortnight after their America's Cup win earlier this year.

Former Black Ferns player Melodie Robinson told Nine to Noon it was great a celebration was being held this year, and the media coverage of the 2017 Cup had been unprecedented.

"But at the same time, I'm frustrated that it took so long."

She hoped this year's win would galvanise people within the sport to advance women's rugby even further.

"At the top part of [the code], a professional top competition could be created - that would be the ideal. Most importantly, how about more tests for the Black Ferns between World Cups?"

Many All Blacks finished their careers with more than 100 test caps, but the women's team had only played 81 tests in its entire history, Robinson said.

"[New Zealand Rugby] really have to give themselves a boot in the butt on that one."

Another former player, Louisa Wall - now a Labour MP - said that, as the proficiency of the women's game increased, it was getting harder and harder for players to commit to the team while also maintaining work or study.

"It's time for our women to be paid, and to run a professional competition."

"We will be sitting down with New Zealand Rugby in a formal process and we will be looking to go through a negotiation process that actually looks at all the different issues we have got to think about, and design and agree what the high-performance programme for the Black Ferns squad looks like over the next two to three years - in the same way that we've done with the women's sevens team."

Since 2014, players in the women's seven squad have received professional contracts - although the value of those contracts is still far below those given to the men's teams.

There had been some gains for the Black Ferns over the years, Mr Nichol said.

That included lifting the stipend players received from about $50 a day, to $2000 a week during the World Cup campaign.

However, he wanted to see provincial rugby back the women's sport, too.

Of 27 provinces, only 11 fielded a women's side in the Farah Palmer Cup this year.

"If I was running a provincial union ... this is a massive opportunity for them."

New Zealand Rugby had earlier indicated there would be no professional contracts for the Black Ferns any time soon, because there was not enough competition to sustain full-time professional careers for them.