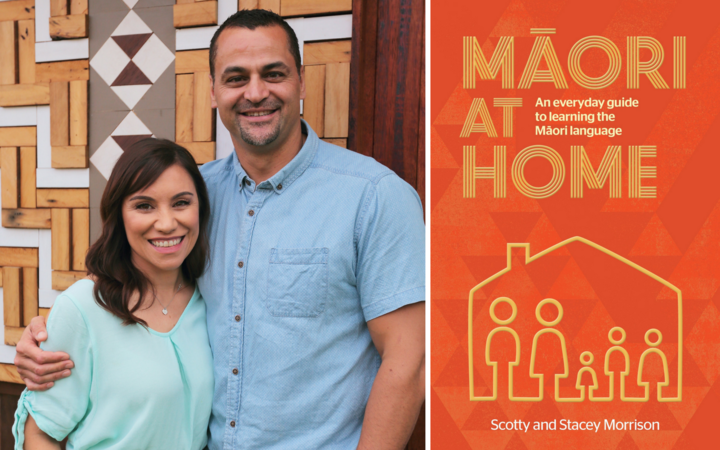 Husband-and-wife team Scotty and Stacey Morrison are on a mission to help bring te reo Māori into the family home.

The broadcasting duo have written an everyday guide to learning the Māori language called Māori at Home.

While there are pockets of Māori who are protective of the language, Scotty and Stacey encourage everyone to participate in te reo.

It can be just as easy as jumping in – and it feels good, Stacey says.

The transformational power of people (particularly men) learning their heritage language hasn't been well documented yet, but she's seen it herself many times.

She wants her kids to feel strength in their Māori selves that she didn't feel.

"As a child, I felt embarrassed and not quite sure that I fitted and embarrassed that I didn't know what was going on in some settings."

Once they get into learning te reo, your kids will leave you behind as they don't have the incorrect pronunciation most in previous generations were brought up with, she says.

"Kids are brutal, man. You've got to try and keep up with them."

Scotty's first engaged with te reo at Waikato University when a Māori language paper was the only one that fitted into the first-year lecture timetable he wanted.

"That was transformative, it changed my life. It changed the way I thought about things, the way I saw my place in the world…. It just rounded me out as a person and gave me direction and something to be passionoate about."

The next year he ended up flatting with two fellow students whose first language was Māori.

"I accidentally put myself into a total immersion environment at home."

You start with individual words and sentences, then after a year or two, the building blocks start to shape the framework of your house.

Eventually, you need to spend time a total language immersion environment to form what Scotty calls "the matrix".

Learning a language is not unlike learning a martial art, he says.

When it comes to speaking te reo at home, one of the biggest challenges is having the vocabulary on hand, Scotty says.

While the couple themselves are "Harry Hardouts" the book is also for people who just want to include some te reo occasionally,  Stacey says.

Once you're up and learning, support will make it easier, the couple say. It could be from a friend, whanau or via the online Māori 4 Grown Ups support group.