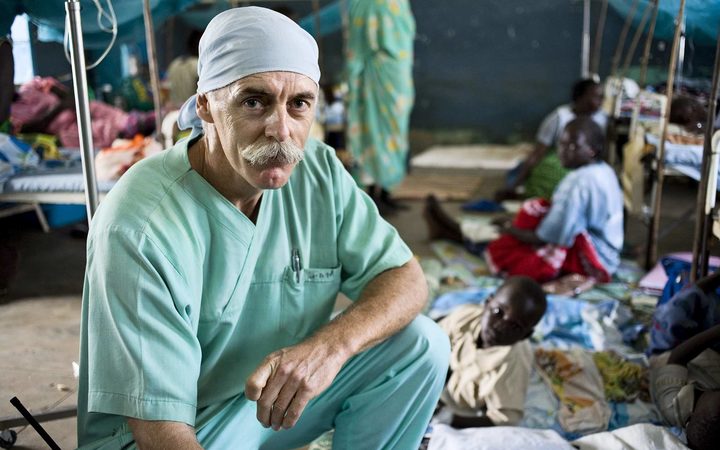 Author of A Nurse on the Edge of the Desert, Andrew Cameron. Photo: Supplied / Massey University Press

Humanitarian aid nurse and midwife Andrew Cameron has worked in some of the world's most dangerous locations.

When not in a war or post-conflict zone, he is the director of nursing and an ambulance driver at the Birdsville Clinic, a remote health post on the edge of Australia's Simpson Desert.

Andrew Cameron grew up in Taradale, a satellite town of Napier, in a family of six.

After getting bullied at school, 15 years later he had a chance encounter with the boy (now man) who had menaced him as a child when he turned up as an intensive care patient at Wellington Hospital where Cameron was working.

"I turned up for my morning shift and the nurse in charge said 'Andrew, you go to Bed 5, there's your patient there'. I went to Bed 5 or whatever it was and there was this same man… He'd met an unfortunate experience with some rivals of his and was essentially brain dead."

Cameron could have requested a switch to another patient, but opted not to.

"I cared for him as best and lovingly as I could until his ventilator was turned off about three days later."

Later he moved to Australia, exploring more job opportunities and an interest in Aboriginal health and remote regions.

One of the challenges of nursing in Birdsville – which has a population of around 100 people and the nearest hospital 700km away – is upholding confidentiality when you know intimate details about everyone in town, he says.

Yet working in big hospitals feels like factory work to Cameron.

"You're told when you can have your cup of tea and you have to be back in ten minutes for the next one to go and all that sort of thing."

So what does he think makes a good nurse?

"A good listener is essential, some compassion for their fellow man and woman and just an enterprising spirit, I think."

To remain a good nurse while treating someone with Ebola to the sounds of mortar fire, you also need a sense of adventure.

Around seventy percent of health professionals who go to war zones toss it in after their first mission, but Cameron always knew such work was for him.

"Once you've done one or two of those missions you get immersed in it and think you're doing something useful for your fellow man... It's just who I am, I guess."

Andrew Cameron's memoir A Nurse on the Edge of the Desert is published by Massey Press.