For the first time in its 118-year history, a woman is to head NZ's independent farming network.

As national president, West Coast dairy farmer Katie Milne will focus on bridging the rural/urban divide and the environmental impact of farming, she tells Kathryn Ryan. 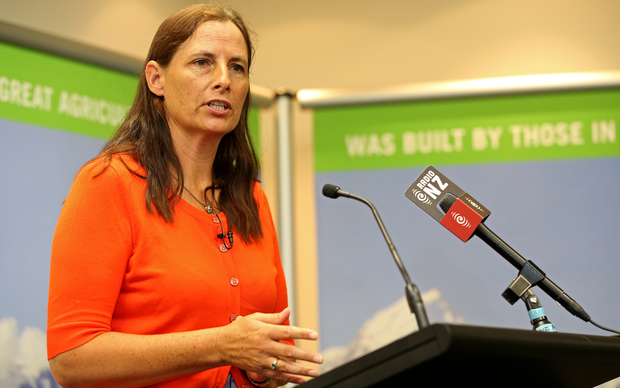 Milne is the former West Coast provincial president of Federated Farmers and currently on the panel of the National Animal Welfare Advisory Committee.

She's also won a string of accolades in the farming world, including Dairy Woman of the Year and a Rural Woman of Influence in 2015.

Her past roles led her to this point, Milne says

“People started to tap me on the shoulder a while ago and say ‘Have you thought about it?’

“I did a 'women in leadership' course last year and those ladies there started to say to me by the end of it, 'Maybe you should think about representing farmers because you just explain stuff to us so well'.”

“The big thing for me is to get mainstream New Zealand to understand farming a bit better because there’s a lot of misleading statements that go on, especially during an election, it makes it difficult for people to trust their farmers.

“What we do is grow food, not only for New Zealanders, but the rest of the world.”

Milne got involved in farming leadership early on when she and her husband Ian had to grapple with the recently introduced Resource Management Act shortly after they bought a dairy farm.

“I walked into meetings and I was the only female that was there, for one, and certainly the only person under 23! But I was welcomed. That’s something people don’t necessarily understand outside of farming, gender is generally not much of an issue.”

Getting stuck in at that nitty-gritty level was a valuable lesson, she says.

“It taught me pretty quickly some of the well-intentioned people running the RMA and on the regional council didn’t necessarily understand what the implications were for farmers on the ground the farm.

“You need to be in these rooms and have your say and make sure that everyone gets it because otherwise you get really weird rules that don’t work.”

She wants to spread the word that modern farming, and farmers, are environmentally conscious.

“People watch Country Calendar and think they are the exception to the rule – in fact, that’s what most farmers do.”

Better irrigation use is one area where big improvements have been made to water pollution, she says.

“With precision irrigation you utilise water super-efficiently. You can put on as much as you need and with fertilisers to keep the nutrients in the root zone so it’s little and often.”

“With the technology that’s coming – and it is in the pipeline right now – it could be that we can have our cake and eat it too. We can still get more production out of the cows we actually have without putting more cows on the land.”

The future of farming could look very different to what we know today, she says.

“What we’ll be growing the in the near future we just don’t know. I might be growing algae or insects.”

Milne comes from a long line of farmers on the West Coast and was brought up on a sheep and beef farm near Greymouth before falling in love with her dairy farmer husband Ian.

“In our first year of share-milking we got an El Nino event that was pretty catastrophic for us. At the same time we got liver fluke [a parasitic worm] which had not been on the West Coast before.”

Eventually they became so disheartened with farming life they checked out and went to Canada for two years.

After that sojourn, they decided to return to New Zealand and buy Ian’s family dairy farm – with fresh determination to make a go of farming after their unhappy El Nino experience.

“It was such a horror event, we’ve learnt from it and we’ve been through it two more times and we’ve coped better. It makes you resilient.”