Jane Goodall 'What we are doing to this planet is deadly'

Dame Jane Goodall is a world-renowned conservationist, primatologist, ethnologist, author and a UN Messenger of Peace. In the 1960s she made history with her ground breaking study on the chimpanzees of the Gombe, in Tanzania, which altered forever the accepted definition of humanity.

The study is now the world's longest-running wildlife project.

At 83, she still pursues a relentless schedule of international travel, raising awareness about a broad range of environmental concerns, promoting action through her Jane Goodall Institute, and her youth organisation, Roots and Shoots, which has members in 130 countries.

Dame Jane is in New Zealand on a speaking tour having just finished another in Australia. She says she is seldom in one place for more than three days at a time.

She joined Kathryn Ryan in the Wellington studio and said focusing on what can be done is the key to not feeling overwhelmed by the enormity of the problems facing the world.

"I've always loved being alone, and being alone is very different from being lonely. Being alone out in the rain forest you're not alone, you're surrounded by life forms, where everything is interconnected and in the rare moments where you are completely in tune with the natural world you are part of it.

"I think it's a little bit what the mystics talk about and it's the most amazing feeling and it's that natural world that I'm going to fight till I die to try and protect for future generations.

"This is where it's really important not to listen when people say 'think globally, act locally' - because if you think globally you're not able to act locally," she said. 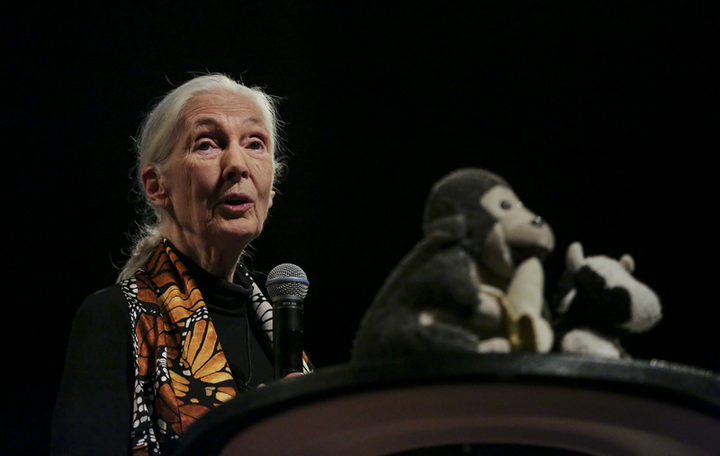 "Wealth in itself isn't bad, it's the way that people so often use their wealth in a destructive manner." Photo: RNZ / Rebekah Parsons-King

"So the point is that each one of us makes a difference every single day, we make some kind of impact, we have a choice, we address the local problems the things that we can do something about."

Small choices can compound into something significant, she says.

"When they're multiplied by a thousand - and then a million and finally a billion people all making ethical choices each day - then you begin to see real change."

She says the Roots and Shoots programme is an attempt to give young people the power to change their world, a world that has been terribly degraded.

"We've messed it up, we've messed up their future, so that when I hear; 'we haven't inherited this planet from our parents, we've borrowed it from our children' I get really angry because we haven't borrowed it, we've stolen it. We're still stealing it."

She sees cause for hope in the Paris Agreement, despite US President Donald Trump's recent withdrawal from it.

"I've been quite pleasantly surprised at how it really has pushed many countries to try and curb carbon emissions.

"China and India are taking the lead, since President Trump pulled out of the Paris Accord they are developing clean, green energy. China right now is in the lead."

President Trump and Australia are out of step, she says.

"Trump wants to reintroduce coal mining. Australia is just wanting to give the go ahead to a huge coal mine, the Carmichael coalmine, which will pollute the ocean and be the last, final hit for the Great Barrier Reef.

"People realise that fossil fuel supplies are not infinite and we're destroying the planet so much as we try to reach fossil fuel that's under the ocean or under the rain forest."

She believes corruption and inequality not only bedevil the world, but are linked.

"Wealth in itself isn't bad, it's the way that people so often use their wealth in a destructive manner."

Dame Jane says an inherited capacity for violence, which we share with our primate cousins, is not the only impulse humans have.

"It's just as important to raise the fact we have the tender, compassionate, loving side - so do the chimps. So if we've inherited aggressive traits from our common ancestors, so too have we inherited love, compassion and altruism.

"With our explosively developed intellect, we are able to think about this. With our ability to discuss and bring people together, we should be able to sort these things out." 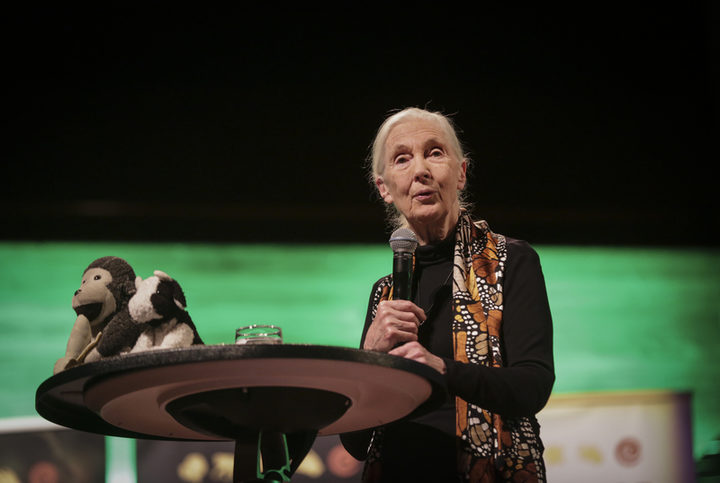 Jane Goodall: "It's that natural world that I'm going to fight till I die to try and protect for future generations." Photo: RNZ / Rebekah Parsons-King