US 'got it wrong' says Saddam's interrogator

A former senior analyst with the CIA says Saddam Hussein hoped the 9/11 bombings would bring the US and Iraq closer as he saw the bombers as his enemies too.

John Nixon was the first man to conduct a prolonged interrogation with the Iraqi leader after his capture, and says Hussein had no weapons of mass destruction (WMDs) and minimal involvement in international terrorism. 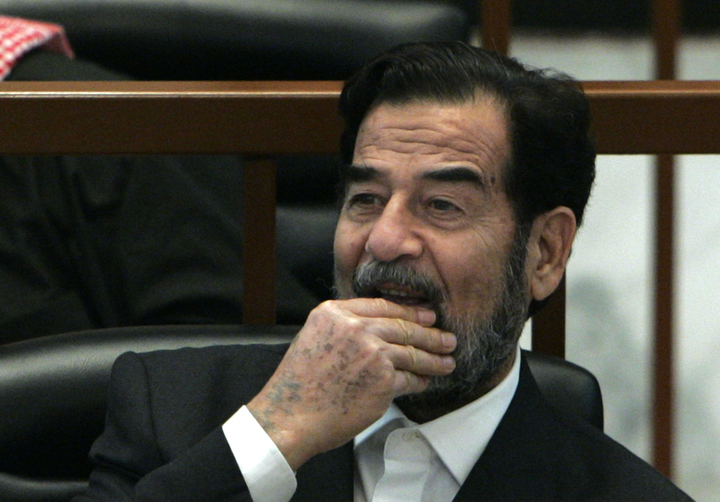 Saddam Hussein listens to evidence during his trial in Baghdad, 2006. Photo: AFP / FILE

In December 2003, after one of the largest manhunts in history, US military forces finally captured the Iraqi president near his hometown of Tikrit.

An expert on Saddam Hussein, Mr Nixon was brought in first to establish the man was Hussein and secondly to interrogate him.

He says the man he interviewed felt under great threat at home and had a poor understanding of politics outside of Iraq.

Mr Nixon says Hussein was threatened by the rise of Sunni extremism inside Iraq and the spread of Wahhabism emanating from Saudi Arabia.

He had also withdrawn from the day-to-day business of government and was a very different man to the Hussein of the 1980s when the US last had a clear intelligence picture of the dictator.

“He certainly wasn’t the madman getting ready to blow up the world as the Bush administration would have had everyone believe,” Nixon says.

Mr Nixon strongly believes Hussein had hopes for a rapprochement with the US post 9/11.

“Saddam had a very poor understanding of the outside world, and he really didn’t understand the United States at all. He was not a great intellect, he didn’t have any experience travelling the world.”

He says Hussein told him he was relieved when he learnt the Twin Towers had been attacked. Hussein he says said surely the US leaders would understand he had nothing to do with, “these people that knocked down the World Trade centre and the Pentagon, these are the same people that threaten me.”

He couldn’t have been more wrong, says Nixon because the Bush administration the very next day began looking for linkages between Hussein and the 9/11 attacks.

When Mr Nixon got back to CIA headquarters he began cross-referencing Hussein’s statements with that of other Iraqi sources of intelligence. He came to the conclusion Hussein was telling the truth on WMDs and his links to terrorists.

“It was shocking and mind-blowing experience all at once.”

He says Iraq’s fate was sealed when George W Bush was elected.

“The question of WMD in hindsight is almost irrelevant, really what it comes down to is the Bush administration came into office dead set on doing something about Saddam Hussein.”

John Nixon's new book is Debriefing the President, the Interrogation of Saddam Hussein