The language we use for people who identify as another gender has grown and grown. And understanding what it all means, even for the communities who value having language to explain who they are, can sometimes be very confusing.

Lunicke says their show Ze: Queer as … is at its heart a complicated coming-out story. 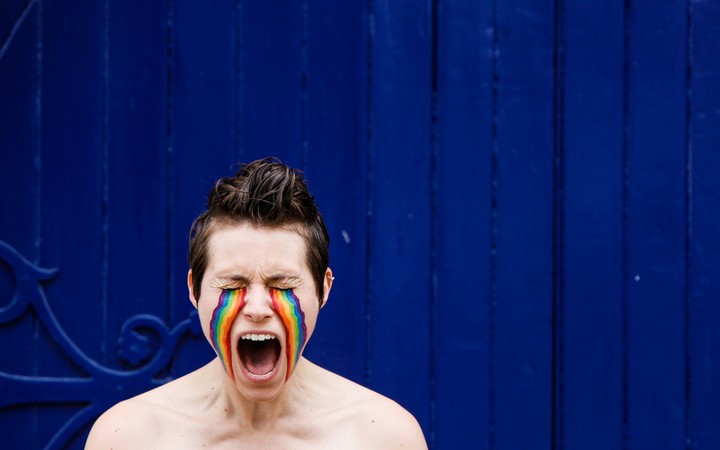 “It’s about different forms of identity, different labels – and being disillusioned by each of those in terms and their ability to define me accurately.”

The show also tracks Lunicke’s progress from feeling: “nervous, anxious, tense, and a bit of shame, towards a place of pride.”

“My other show, I'm an Apache Attack Helicopter, which debuts at the NZ Comedy Festival, is more geared towards having a conversation with a mainstream, straight community.

It’s about how we used to do this thing called ‘humouring each other’, where we set our beliefs aside for a minute and listened to what people had to say, and had a think about it, and then compared it to our own lives.

“I talk about ‘minority fatigue’, when you’re overwhelmed by the number of labels and terms and you’re just kind of embarrassed and you’re not quite sure how to approach it.

“I provide some metaphors, like, I don’t understand advanced calculus, but I know that it exists!”

Lunicke talks about the importance of community, and how that goes beyond providing belonging and safety for individuals as part of a particular group.

“We’re tribal people. We have a limit to the amount of empathy that we can experience for the people around us, and that serves us very well, evolutionarily, to protect that group of people. But all these communities overlap. We’re all interconnected, ultimately.

“It feels safer and easier to be around those who agree with you, but then you don’t have the transference of ideas in a way that promotes empathy.”

Sexual identity and our intimate connections with people are often thought of as private, but when people come out, intimate truths have to be exposed to people.

“There are two parts to coming out,” says Lunicke. “The first part is coming out to yourself. It’s true for lots of people about all kinds of things – they know something’s true about themselves, and they keep that private. The second part is all the social stuff – your community acknowledging you. Any time you have one but not the other, you have huge problems.”

Being gender queer, Ren uses gender-neutral pronouns such as ze or zer or they instead of he or she. Pronouns create problems for people from grammar perfectionists to others who struggle to remember which words to use.

Everyone makes mistakes sometimes, but Lunicke recommends practise at all times, whether the person is present or not.

“You have no idea of the power you have to light up someone’s day by using the correct pronoun, by acknowledging them. It’s so simple.”

As for the world of comedy, with new sensitivities and the sometimes overwhelming feedback of social media, is everything becoming more challenging?

“I think for straight people it is!” laughs Lunicke. “I think if you’re invested in a community then you can play with them. The power is more equal, and you’re holding yourself accountable to those people.

“In this era of polarised thinking, comedy is one of the last ways we can relax and ease into these issues, and learn about them by overcoming embarrassment and having a laugh at our awkwardness – about a whole variety of issues. And that’s why I’m doing what I’m doing.”

Ren's perfomances of Ze - Queer as... and I'm an Apache Attack Helicopter will be touring Auckland, Wellington and Dunedin as part of the New Zealand Fringe Festival.