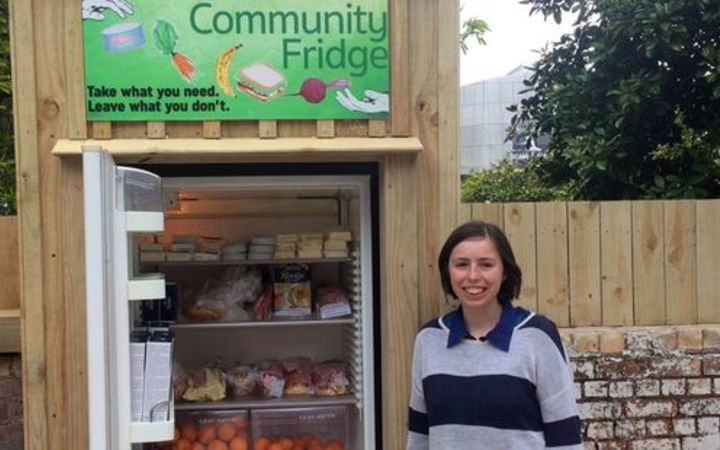 Space-hogging, leaving rancid items at the back... sharing a fridge can test anyone's patience.

A new project in Auckland has redefined the idea, with a 24-hour community fridge on the corner of Albert and Wellesley Streets that feeds the hungry at the same time as minimising food waste.

Each year New Zealanders throw out the equivalent of 213 jumbo jets, or more than 122,000 tonnes of food.

Zero-waste blogger Amanda Chapman and a group of fellow community waste champions wanted to do something about it.

“I’m passionate about food waste and I hate seeing it go to waste, I’ve seen things being thrown out by businesses and people before.”

The community fridge is not a repository for anything and everything, Chapman says.

“We have a set of rules on the fridge saying we’re not accepting fresh meat, fish, raw eggs - nothing that’s been cooked in someone’s house.”

The cooked food they receive is mainly from registered commercial kitchens, she says.

If the turnover is an indication, the project is a success.

“We check the fridge twice a day in the morning and then after work we have cleaning supplies there and we have a thermometer to check the temperature of the fridge.

“It’s being used so much. Every time I check it, or someone sends me photos, the contents of it are different every time. The turnover is really quick.”

Chapman says this is a pilot, but she hopes it will continue and a network of similar fridges will take root throughout the country.

The community fridge movement began in Spain in 2015, and other fridges have been established in England, Belgium, Argentina, Germany and the United Arab Emirates.