'The dream is to rule the world' 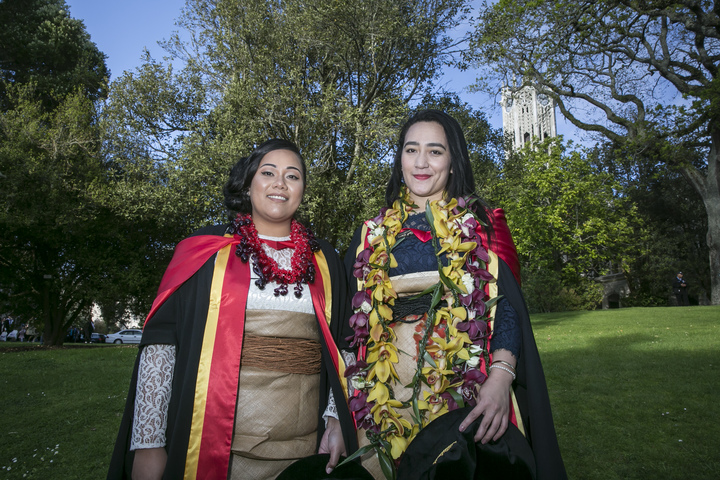 Sisikula Sisifa and Ilaisaane Fifita are research fellows and PhD graduates and the first Pacific academics at the University of Auckland's Business School. Ilaisaane was raised in Tonga and has spent 10 years at the University of Auckland, studying two Bachelor degrees and graduating this year with a PhD in marketing, focussing on smoking prevention. Sisikula was raised by her grandmother in Auckland before her family left Tonga to settle in New Zealand. Her PhD looked at project management practices used in Tonga.

Sisikula, do you want to start with your own story, and why you chose this particular area to research? But first your path into academia, in your family a lot of people were involved in tertiary education and coming from a high-achieving family.

Sisikula – For myself it was expected that I do go through and enter university after high school. So I have four brothers and one sister and all of my older siblings had gone through university in Auckland. All in different paths. So my brother is a lawyer, I have a graphic designer brother and also my sister is in marine biology and a younger brother who is in agriculture.

For my parents, education was always the pathway for us children. Like, I said it was expected so after high school I went to university and started a Bachelor of Business and my father just said, ‘It doesn’t matter what you go into in tertiary studies, just make sure that it is something that you are passionate about so you can have some sort of leverage with every other employee in your field.’

Obviously tertiary education mattered and they’ve made big sacrifices to make sure that everyone could get to uni, but the ultimate advice was do something that you love, don’t just do it to get the qualification. Which I think is true of both of you, you’re pursuing research that is really personally important to you too, is that right?

Sisikula – Yeah, it wasn’t just something that you are passionate about, but make sure you are being of service. Give back. Whether it be to our own little small community back in Tonga or whether it be on a global scale and you’re giving back to society and humanity as a whole.

A lot of people have played a really important role in this and like I say, the sacrifice I was alluding to, was that the family came to New Zealand from Tonga originally, but for a time you had to leave your folks and leave your family and come here. Someone really important played a role. Tell me about your grandmother and living with her and her encouragement of you.

Sisikula – Yes of course leaving my family behind was a very big decision and also was very hard, but my grandmother was a driving force in terms of making sure that I was always well fed going to school, always turning up on time and always being present. For Pacific Island parents that is something that they are really strong with and it doesn’t matter what they come with, but they are always present for their children and that is what my grandmother was for me.

In the first year of my PhD, she passed away, which was obviously a struggle and I was advised to take some bereavement leave. I thought, ‘Well if my grandmother were here she would want me to keep pushing’ and with God’s grace I did.

And we should mention your dad too. You had some really hard personal times while doing this study. Were there times when you thought it was too hard and you wanted to take some time out or were you inspired by the example that they had set for you and knowing they would want you to make the best of your opportunity.

Sisikula – It was definitely difficult. My father passed away in the third year of my PhD. I think as a PhD student you are already facing these real big challenges and you are trying to intellectually grapple with these concepts that no one else has ever understood before, so that in itself is a challenge but then to face personal struggle where you are trying to figure out why should I keep pushing when two of the biggest driving forces are not here.

I’ve been blessed with my immediate family. My mother who is still here she has supported me throughout the whole thing and said ‘If you want to leave this PhD behind you, then do that as long as you are okay and you are safe and you are well’. I just looked at her and said, ‘To be honest, because they’re the driving forces I am going to finish it for them’, so I did.

At some point and maybe it’s now, maybe it’s with the graduation, in some ways you are going having to confront the grief now, because as you say the demands of the studies and originating new thought and new ideas, is this a time now where there is a reflection on a lot of things for you?

Sisikula - Yeah, definitely. There’s been a few months of reflection and now I’ve achieved this milestone, it’s now in some ways dealing with that grief and starting to realise that these two important people in my life are no longer there to celebrate this but at the same time trying to live in their spirit and achieve the goals that they had set for myself and my siblings.

Ilaisaane, most of your schooling was in Tonga, was there one year where you came to do some schooling before going to Auckland University? What was your path?

Ilaisaane – Yeah so I spent most of my education in Tonga. I did primary and high school and I only came here for 7th form before going to university.

Wow, how big of a shift was that at that stage? To come to Auckland and then go into what I imagine was a very different sort of education environment. Was it a straight forward transition?

Ilaisaane – It was a significant change. I did become very homesick. I missed my family, I had never been away from them but also the learning was quite different as well, in terms of cultural differences. So that was a big change I had to get used to.

Such as whole methods of learning and the way the group supports… but very strong co-operative way of learning instead of this individualistic way of everyone pursuing their own path. Would that broadly characterise some of the change that you had to face here?

Ilaisaane – Yes that’s right. One of the big differences that I noticed, in Tonga, there’s this… it’s a bit more hierarchical so there is this respect for the teacher and when you have discussions it’s almost passive. You have to only answer when you are asked a question, whereas here I found that the students and the teachers they had a debate, and a critical discussion between the two and that was encouraged.

More challenging, and you would have perceived that as being almost rude.

Ilaisaane – Yes, so that was encouraged and I had to get used to that.

Did you have family here to support you? Because for anyone, you are really vulnerable to homesickness at that age.

Ilaisaane – I had my sister here, so that was good.

Ilaisaane – Initially my plan was just to finish my undergraduate degree and then go back home and help my family, but then I found at the end of the degree that I was really interested in marketing because I did a conjoint in Information Management and Marketing, so I wanted to learn more. So I did the Bachelor of Commerce Honours in Marketing. And doing that it was much different to undergrad and I found that I had a passion for research so then I continued to do a Master in Commerce and Marketing and then I did the PhD in Marketing.