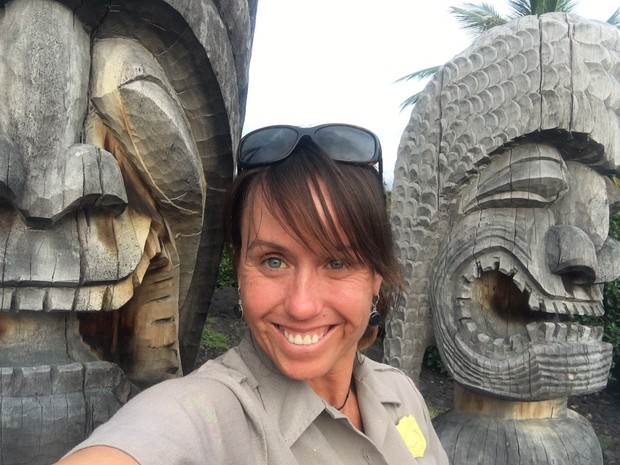 A senior figure in the US National Parks service is visiting this week to exchange ideas with iwi and DOC officials about the environmental issues facing parks around the world. Superintendent Tammy Duchesne talks to Kathryn Ryan about her job and working with 20 thousand others in the organisation looking after 401 sites.

What are the pressures on the service itself? It’s interesting that you talk about these different components of this kind of heritage protection, because there are the wide open expanses, then there might be areas that are urban or bordering urban areas and there are a lot of pressure for land, for water and resources. Is that a pressure that you’re having to resist?

Absolutely. I manage two national historical parks in Hawaii. One is called Kaloko-Honokōhau the other one is Puʻuhonua o Hōnaunau National Historical Park and the northern park is quite interesting, it was actually established after an outcry from the native Hawaiian community, who saw a lot of their land being really taken over by some resort developments, hotels and they were really concerned about having their space so they could practise their culture and the area with which they identified would remain protected.

So the way that this park got started was this group of citizens who actually wrote to their Congresswoman Patsy Mink and they asked that this area be preserved. And through their outcry they were able to preserve Kaloko-Honokōhau, which was then a national landmark. They were able to turn that into a national park in 1978 and what they saw in it was that it was a kipuka, which means that it was an area that was spared of lava flow, so it’s a metaphor, but now the park is 600 marine and 600 terrestrial acres and there is development all around the park.

How do you win the battle between people saying people need houses and what do you say in response about other things that people need?

Again the park preserves a settlement from the 900s and it has great archaeology sites. The park was established to preserve, interpret and perpetuate native Hawaiian culture, so when we received the park in 1978, it is our job through the Organic Act to keep the park as it was, and that means the same species, the same water quantity and quality, so we have to be vigilant about monitoring.

When a proposal comes in that proposes to extract as much water as is already being used, we have  great concerns because that already threatens the species that live in our park, which threatens the ability for our community to practise their culture. In our legislation it actually says that the park will work with other entities including state and local government to protect the air and water quality and quantity around the park. So even though it is our mission to preserve and to protect and to work with state agencies to have this good system of air and water quality management, as you know, it’s hard when people want to build affordable homes. There is an outcry. So what I say is that we believe that we can do things responsibility if there is proactivity, planning and we work together.

You talked about that ability to bring everybody on board. How have you seen it happen in different places in different ways?

Well it’s challenging. In the same way you said, if there is over extraction or overuse, that could hurt our coral reefs. Coral reefs are a big generator of economic livelihood, so we believe that we are trying to do a lot of education to convince people that it doesn’t have to be and/or. We can’t have really responsible and strict and healthy preservation measures that also allows for healthy management.

It’s a new paradigm and it scares people, because water has never previously… on the island I live on, it’s not really managed right now, water. It’s more of a free-for-all state. So the idea of water permits and any type of legislation or regulation, people feel is really contentious and federal over reach and it’s really impeding on their rights.

So it’s about having a conversation many times and just really being a good listener and just really trying to allow people to understand that you’re not trying to say no development, but there has got to be a way for thoughtful, responsible, proactive development. We want people to be able to come to the table with the tools to be able to make good management systems.