How to make your kids smart: play with them! 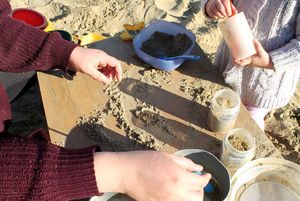 Creativity and play is essential to the development of intelligence in children, a parenting expert and founder of X-Factor education Nathan Mikaere-Wallis says.

He told Nine to Noon play is at the forefront of learning between the ages of three to seven.

“Parents tend to think of play as being the opposite of learning and I think in that dichotomy, you’re thinking about learning as a seven year old. The sitting down and learning something and taking on a new skill.

“The central ingredient of playing is responsiveness and, in fact, babies are doing that in the last trimester in the womb.”

‘Play’ is interactive, unstructured activities – usually away from the iPad. Having an imaginary friend at this age is a good sign, too.

“You can also play by yourself. It’s about it being non-purposeful and open-ended, for the fun of it.”

Longitudinal studies show that the more free play there is in early childhood, the less statistical chance there is the child will go to prison, Mikaere-Wallis says.

“That seems counterintuitive to people because in New Zealand, we’ve got this idea that the earlier you act like you’re seven [by reading and writing], the better off you’re going to be for the rest of your life.”

Mikaere-Wallis would also like to see parents allowing the kids to take the lead when playing together.

“We as adults, when we tend to play with kids we want to lead it and we put rules and structure onto things. Children live in a very emotional world. We can follow children’s lead, let them lead the play.”

Humans start using their frontal cortex from the age of seven, the part of the brain that engages logical thinking.

“Who said you have to follow the rules? There’s plenty of time for that after seven.”