Bangkok is an epicentre for human trafficking and home to Carter Quinley – an American-born woman fluent in Thai who works for the New Zealand-founded anti-trafficking organisation Nvader. 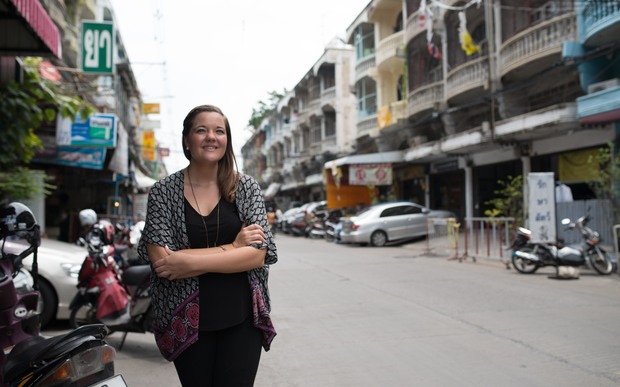 Carter Quinley on the streets of Bangkok Photo: supplied

Earlier this year Nvader helped shut down one of the largest brothers in Bangkok – 200 women were being sold there, including 15 minors. Yet Carter points out the stereotypical image of ‘human trafficking’ New Zealanders might have – "a very young girl locked up in a brothel" – no longer paints the full picture.

Forced slavery is not just a ‘women and girls’ issue, she says. One case this year involved an African man who was trafficked to Thailand for sexual exploitation.

Human trafficking is the fastest-growing criminal business in the world, with an annual profit of around $150 billion (more than the profits of Google, Nike and Starbucks combined).

Carter says that "prevention is the best protection" for potential victims of this crime, and the most effective deterrent is successful prosecutions and lengthy prison sentences.

Carter Quigley is in New Zealand to speak about Tearfund's Live Below the Line initiative.