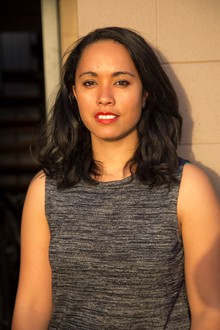 From writing poems as a child growing up in Glen Innes to the renowned Iowa University writers residency, poet, writer and performance artist Courtney Sina Meredith is well on her way.

She as just released her second book, Tail of the Taniwha, it is a collection of 18 short stories, some with a poetic feel. It draws on her life experiences, growing up in Taniwha Street in Glen Innes, and also her Samoan, Cook Island Maori and Irish roots.

Her first published work was a book of poems, Brown Girls in Bright Red Lipstick.

Who inspired or set the way for you to explore your writing style?

I think it’s a collection of things. Coming back to the Manukau Institute of Technology, where I am the partnerships manager with the arts faculty. I am surrounded by fantastic writers on a daily basis and it was many moons ago now that Robert Sullivan returned from Hawaii and took me under his wing. I think I must have been about 22 at the time when he first approached me after a reading and said, “Look, you’ve got something really special and I would like to help you along in your journey however I can.

Also, Tusiata Avia is out there at MIT and she is such an incredible talent and also a really dear friend. I knew of her work when I was at university a decade ago and knowing that she was out there, was also another really powerful influence. It is definitely a collection of things.

I have always loved Radiohead since I was a child. Thom Yorke, wow, one of the best poets of all time. I think there is a freedom in music that I have basically tried to translate into poetry, into prose and also I have just been open, I guess, to when I have different ideas when I am thinking to myself, ‘This isn’t traditional, this isn’t what people are used to’, instead of shying away from those moments I just try and pursue them with force.

In many ways things began with performance with you, as a singer-songwriter and as a performance poet. Does that verbal and performance element find its way into the writing?

When I was at university and I had just embarked upon a Bachelor of Arts and I was also thinking at the time that I could become a lawyer, so I was doing a conjoint, I knew even then that I really had to think on my feet and I knew that the work had to be good. But it’s more than that. It’s more than the work just being good and coming from a place of authenticity and having complete integrity with your voice.

I knew that if I could learn all of these poems off by heart, it meant that yes I could go into slams, I could go into performance poetry, but if I met people and I really connected with them and they said, “We may have this opportunity for you or not but we don’t know what your work is like”, I would have all of these works to deliver at a moment’s notice.

So I wanted to build networks and I wanted to find a way to have my voice in the world without it having to be watered down or to represent the notions that we already have around what prose or what poetry could be.

I think that’s kind of when the journey first began for me, when I started to think differently about having words on the page and you can see that in Tail of the Taniwha.

Auckland is known as the biggest Pacific city in the world. It is the reality of most people growing up Pasifika today in this country and we understand aspects of it, but that’s not the nitty-gritty of daily life and is that another strand of what you’re trying to write here and trying to get people to reflect on?

When you’re thinking about this generation… I am second generation – my mother was born here, and her parents came across from Samoa when they were both teenagers. When you get to my generation and you’re looking forward into the generations to come as well, in terms of having a sense of place and a sense of belonging and feeling connected to our ancestry and to where we come from, there aren’t necessarily enough conversations around how we deal with that now. How we look at that now and what we’re looking towards in the future.

You’re right when you’re talking about music and sports and people identifying Pasifika communities in this one particularly way, but one thing we don’t really talk about enough with this young generation too, who we’re so hard on because we don’t know the languages, we don’t know the dances, we don’t go back to the islands enough – if at all, is the reality that we were all socially engineered to be like this to some point.

Our grandparents or our parents migrated here with dreams for a better, richer, fuller, bolder future and you now have those young people who are out there in the professions, who are travelling, who are speaking up, who are entrepreneurs, who are contributing to New Zealand and the way that we think about this country in unimaginably beautiful, kaleidoscopic ways. We are adding so much to the cultural fabric of the country, but again I think we haven’t had enough conversations or discussions in the community to accept this generation now and the generations to come and to work on that acceptance and building new ways of being Pacific now and in the future, where it’s not a case of either or, but where it’s about having all of those different strands to your identity and to yourself and being really at peace and fulfilled with that.