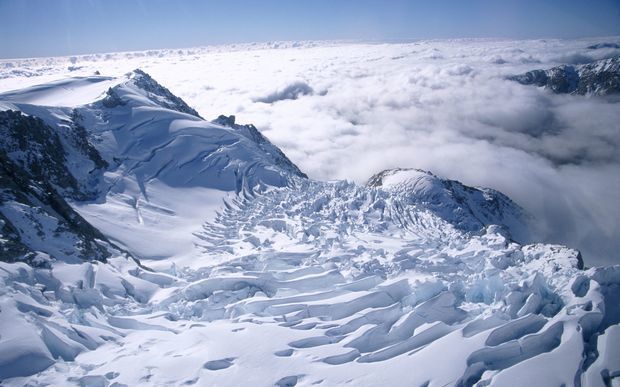 Kathryn Ryan speaks to glaciologist Trevor Chinn on the rapid shrinkage of the country's glaciers. Over four decades Dr Trevor Chinn has photographed all of the South Islands glaciers, of which there are more than 3,000 as part of a world glacier inventory project.

The central Southern Alps has lost a quarter of its ice in recent decades and stands to lose another 50 to 60 percent. The issue has been discussed this week at the Sustainable Summits conference at Mt Cook.

Yes, it is because glaciers are always fluctuating and trying to make a balance of ice they’ve gained from snow and ice they’ve lost to melt.

The best way of approaching this to understand it is to start with the definition of a glacier. The definition of a glacier is the amount of land above the snow line and that collects winter snow that doesn’t melt in the summer. Fortunately it is a kind of semi-fluid flow. If it didn’t flow, all our water would be at the top of the mountains as a huge block of ice. It flows down to where it is warmer and gets melted away, so that is the definition of a glacier. It is the spare snow left over after many years that moves down the valley to be melted away where it is warmer. It is the area of land above the snow line that gives you the size of your glacier and it is the size of the valley below that gives you the shape and length of the glacier.

That said, is this then acting as a canary in the coalmine to other things? When you see the shrinkage happening at this rate, how and why do you explain it?

It is explained by the snow line rising. That is cutting down the area of the land that is available to collect snow and the analogy of this, is look at the coral islands in the Pacific Ocean. The snow line is like sea level. When the snow line goes up on the glacier, it reduces the area of land and when the sea level goes up on the coral islands, it reduces the area of island available, so it’s a very good analogy to compare it with. In that way the question of, when is the last glacier going to disappear, is the same as asking when the last island is going to disappear with the rising sea level. It’s a wee bit ridiculous.

Is it a measurable indicator of climate change?

After measuring all of these glaciers, the volume of ice in the glacier is a measure of everything that the climate has done over that glacier over say 10 or 20 or 100 years. So the glacier is averaging the climate, but not just the temperature. Every single piece of climate parameter that is going on affects the glacier in some way. The world’s best climate change instrument is probably the volume of ice on our Southern Alps. It is the most accurate and reliable measure of climate change.

What do you make of the rates that are cited here? As we said this conference was talking about the Southern Alps losing a quarter of its ice in recent decades and standing to lose another 50 or 60 percent? Would you concur, and if so, what’s going to happen to those 3000 glaciers that you have documented and photographed? Particularly the most famous; Franz Josef and Fox, there’s the Tasman Glacier… What is going to happen Trevor?

In accordance to their response to the same amount of rise in snow line, it is going up the same amount everywhere. When you think of the Greenland ice sheet, when the snow line is very low and down near the sea level, you’ve got one glacier that covers the whole country. In the Ice Age we had a huge, almost one, glacier. As the snow line went up it started going up, separating the mountain peaks, so you get a whole lot of glaciers, lots of small ones, and then as it goes up more, the number of small glaciers starts dropping off. We seem to be pretty close to the maximum number of small glaciers because we’ve got so many of them and they’re all melting away quite happily there. But the response to the climate warming is different on different glaciers.