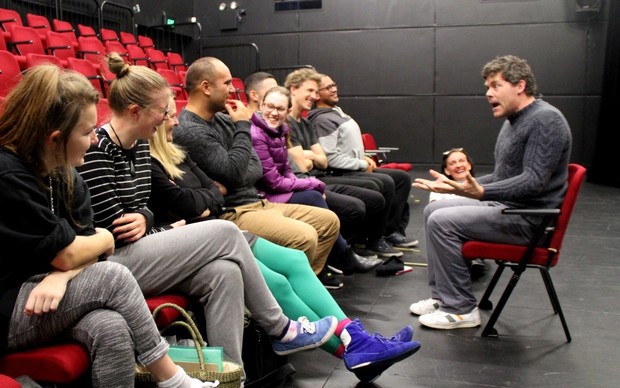 Sue Haldane is the founder of a charity that uses the power of theater to help people get inside the minds of people with autistic spectrum and attention deficit disorders.

Her latest workshop is focusing on helping police and other first responders deal with the neuro-diverse community.

Sue points out that 80 per cent of offenders are estimated to have neurological disorders and as a parent of an autistic child herself, she thinks it is critical for the wider community to have a better understanding of how their minds work.

We’ve had some very high-profile cases where clearly [neurological disorders] are a factor. Not understanding a person in a situation has led to some really awful outcomes. Has this been a big motivator for you as well as in everyday life; being able to better communicate with people who have neurological disorders?

Well, yes. My first knowledge of this came when I was directing devised theatre in secondary schools. A lot of very, very anxious students would be coming and they would flourish in the drama class and a social network that was shaped to foster their capabilities, really. A lot of these teenagers were what you would call sensory seekers. They were always looking for more energy and they wanted more to be happening, so they loved the drama when they got into it.

But also for me, as a result of having a child who is now 21 years old, he was with Asperger’s and ADHD, which made learning in a school environment difficult. It was a really nerve-wracking process as a parent to see your child not flourish. It was isolating. People often judged what was happening or said that I needed to do something, but I didn’t know what to do.

Because of my background in theatre and working with youth, I got activated in making something happen.

Back in time, I worked a lot in prisons and judicial systems using role-play work. What I have done now is studied more and advanced more into using applied theatre work. We don’t just do role play, but we use theatre practitioners and we create workshops that really enable parents and youth workers and social workers and people in youth law to fast track learning what is going on with these teenagers.

This is all about having a better understanding of what someone else is experiencing so that your responses and your actions are best tailored, right?

Absolutely. There’s very much this thing about needing to fix them. They talk about them being disordered, disabled, dysfunctional or deranged. A lot of these kids with ADHD or ADD are incredibly bright. As we know also with Asperger’s or autism, there is a lot of high intelligence going on there and they are micro-focussed. But what there isn’t an understanding of by the wider community and the outside eye, they will often say to the parents, “You need to do this”, or “You should do that”, or “That kid needs a good kick up the butt”. And actually, those classic parenting books don’t work. So as a parent, you get this immediate knot in your stomach because you’re being told what we have to do for your child, when actually it doesn’t work.

These kids don’t change. They’re not linear thinkers. They don’t think in the same way about time as we do. A book by Gabor Matte, called Scattered, really helped me understand a lot about ADHD and ADD. It talked a lot about how those people think about the now, and the not-now. They have a really different sense of time. They don’t have a sense of outcome.

While they are very good hearted, they may jump in… the bully may chuck the shoes up into the tree, and the good-hearted person who is hyperactive will jump up that tree without thinking, go up and get the shoes for the person who is wanting their shoes back, but actually in their impulse and in their desire to please, they fall down, break their arm and out comes the teacher, really, really angry and reacting to the fact that you’re not allowed to climb trees at school.

So we have that whole self-fulfilling prophecy that keeps getting reinforced that adults are hostile and can’t be trusted and then we get into this conflict cycle that then result in these kids going off the rails. They’re angry.