Not only did 10-year-old Thor Larson do really well in an Australasian Scooter competition, he's attracted the attention of his idol - American four times scooter world champion, Dakota Schuetz. 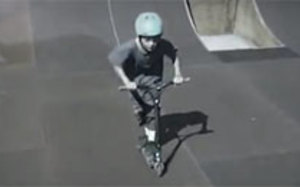 Thanks to some intervention from Thor's mum Trish Kearns, Dakota has ventured Downunder to meet Thor, do some scootering, and set up a workshop for Thor's Year 5 buddies...and anyone else who wants to join them at Marine Parade's Sk8 Zone.

All good so far, only there's a twist. Thor's skate park - which is a bit of an institution in Napier - is being dismantled this month.

The 61-year-old park is due to be replaced later this year with a new skating area on the former Marineland site.