Steve Hely has written for likes of The Late Show with David Letterman, The Office, 30 Rock, and American Dad. 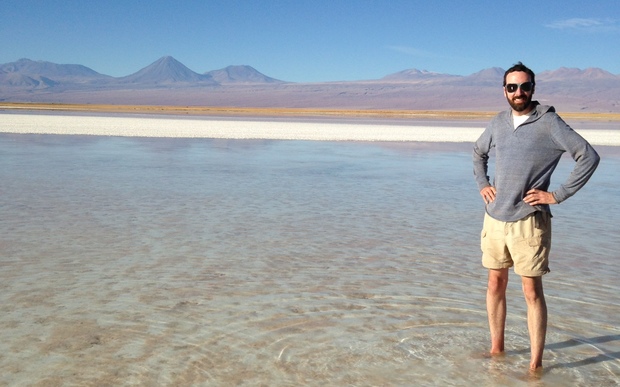 While his satirical take on writing a bestseller, called How I Became a Famous Novelist  won him the 2010 James Thurber Prize for American Humor.

He's also the co-author of the comic travelogue, The Ridiculous Race, and co-host of the podcast, The Great Debates.

His new book The Wonder Trail is a 13 country adventure through Central and South America.

And he's coming to New Zealand at the end of August for the WORD Christchurch Writers and Readers Festival.

KR: Your career started pretty much straight out of University.

SH: Yeah, I went to Harvard University and I was at The Harvard Lampoon where a lot of TV writers have got their start. Then I went from there to writing for the Late Show with David Letterman after school.

KR: So was it an ambition straight away or something stumbled into?

SH: It was at The Harvard Lampoon that I learned that TV writing was a job that was available, it never really occurred to me that people were getting paid to write TV shows and come up with jokes and stuff and I was enjoying that lifestyle in college, so I thought if I could do it as an adult I could definitely try out at least.

KR: What was your experience writing for the Late Show initially? What was it like to be hired there and make your way in something that has become something of an institution?

SH: There was a lot of learning on the job. The shows are usually taped at about 5.30 in the afternoon so you start in the morning and there’s a clock ticking from when you first walk in the door. A lot of it was just sitting at a desk and cranking out jokes that then get sent along and the pick out the strongest ones. Some of it was racing around and trying to edit a video piece or put something together, or shoot something up on the roof, or shooting a remote piece outside – scrambling to put that all together. Yeah, it was an exciting and hectic place to work.

KR: Is it clenching that environment? Is it competitive? Is it almost a satire take on itself, like the sort of thing you would see on a show like 30 Rock?

SH: A little bit yeah. There were people who liked to push boundaries and play pranks on each other and stuff. There were odd and eccentric characters. But mostly it was pretty collegial I think I mean you had people who had a sense of joy about their work. If the shows functioning well and they’re proud of it and they have a sense of joy about it and they feel like they’re doing something that they’re called to do, which is fun to do. Even if at its best, it’s a lot of work and a lot of stress, hopefully, there’s a fun part of it.

KR: What do you see happening to the late night talk shows now?

SH: I maybe think we’re moving towards a point where people have a stronger, sharper viewpoint. Like Johnny Carson and David Letterman had a mid-Western old All-American kind of openness at their heart which made a lot of sense when you were broadcasting to 300 million people versus a very fragmented market [now] where you can get any voice you want to hear. Maybe [new talks shows] will lead to people being a bit sharper and a smaller audience, with a sharper take. I’m not sure. On the other hand, maybe some populist voice will emerge out of it too.

KR: How the line determined between what is funny, and what is going too far? Is that often one of the challenges of the job - to not lose your audience by crossing that line?

SH: Yeah, I’d say that is a challenge. Often you have to make sure you find the pitch you think is right. Sometimes you want to push it a little bit, but there is a lot of stages along the way of reading the script aloud. Like in American Dad, all the animators are gathered and you read the script aloud, you have what’s called a table read - and you can just feel in the room if the groans are outpacing the laughs, you’ve probably taken it a little too far.