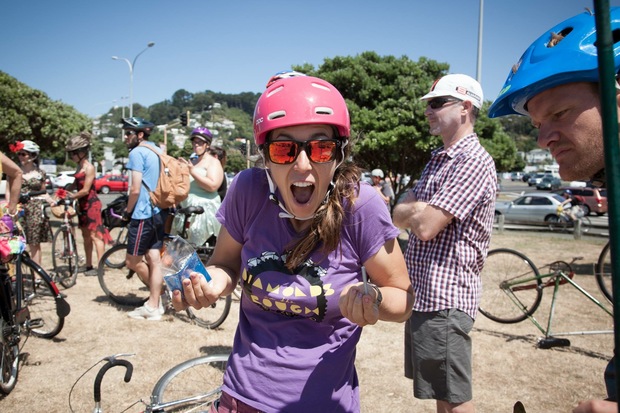 Ash Burgess is a young Wellington woman determined to bring people of all ages and abilities into the sport of mountain biking. She's the co-founder of the popular women's riding club Revolve. She's behind a hugely successful children's mountain bike programme WORD, which has plans to go national. Ash also founded Joyride which runs skill sessions for people of all abilities. She teaches children cycle skills in a school programme called Pedal Ready. And in her spare time, she leads adventure cycle tours around the world - she's heading to Kyrgyzstan with a group of cyclists to cover 550 kilometers in 14 days.

How did you get into mountain biking?

I really got into it in Wellington with mountain biking so accessible. We’re really lucky to have our downtown 10 minutes ride away and we’re in the trails and that was something I immediately picked up on. I joined a local cycling club PNP Cycling club and they run a series of races and thought that was my way in and a great way to meet people. And that led to knowing some people at bike shops and at On Yer Bike, Nigel had wanted to start a women’s cycle group, so asked myself and my friend if we would lead this women’s road ride and we did and sure enough 20 women showed up on the first day and we were just floored. That was the beginning of Revolve cycle club.

Did you try out all of the different types of cycling?

Yeah, I just found that I loved being on a bike. I liked the freedom of it, I loved the adventure; big long rides or just going for a short one during lunchtime for a ride on the trails that you could do in an hour. I think there is something quite special about the adventures that you can do on a bike.

The biggest thing with mountain biking is balance, and starting on the easiest trails. One of the things we talk about in WORD and Joyride is we want people to have a good time, so we start with the lowest common denominator so we’re starting on grade 1 trails, which is the equivalent to a flat gravelly road and from there they get narrower and varied with the different obstacles that are on the trail, so we always start small and build our way up.

Is it a sport that is dominated by more men than women?

What are the women you are trying to encourage into it say are reasons why they don’t want to commit to it as a sport?

Time, money, confidence. I think they are a lot of the same reasons why men don’t get into it, as well. It’s quite similar. But I have found that having women’s skills courses and women-specific events are actually quite encouraging to women.

What are some of the main reasons people give you to explain why they have a resistance towards mountain biking? I am more likely to walk or run - slowly. One of those reasons is that I like to let my mind wander when I’m out walking, but I have a perception that you can’t do that when you’re out cycling.

Yeah, you can certainly let your mind wander when you’re cycling up hill, or when you’re doing something that you feel is easy, but it’s going down hill when you can’t think about anything else and that’s the beauty of it. You’re in that flow.

I think that’s almost the assumption with mountain biking, that it is hard and scary. But it’s not. It’s what you make of it. That’s why there’s such a wide variety of trails and we’ve got the amazing New Zealand cycle trails and most towns around New Zealand have an incredible range of mountain bike trails now that we are really lucky to have.

Tell me how that works, because I know Revolve is involved in that and it can get a bit controversial, again because the walkers and the runners all want to use the same space and also because people think, especially in trying to protect the green belt spaces and no one should be carving any more through them… how well does that get navigated?

The mountain bike community is very good at being good mountain bike ambassadors, if that makes sense. Mountain bikers want to share the trails, we feel so lucky that we can even use the trails. They are certainly the ones who are building the trails, but they also are maintaining them and getting out there on the weekends and doing the planting as well. Miramar and Aro Valley are really good examples of local-built trails, but also local-maintained trails. For WORD, our after-school programme, one of the days we actually do a trail maintenance session and I think there is something special about working on the trails you are actually using. We compare it to… you don’t see kids out on the soccer field mowing the lawn before they start playing, but mountain bikers are actually out there, they are creating the surface they’re enjoying.