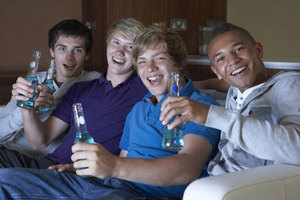 As ball season looms, what do parents need to know about supplying alcohol to teens, or hosting parties where alcohol is present?

Last week, several organised after-ball parties were cancelled after police warned it was illegal for anyone unlicensed to run a party where people drink and where there was any sort of money charged, regardless of age.

But what about a pre-ball or after-ball party, being hosted in a private home?

Can a host gain express consent of the parent or guardian of a minor and provide them with alcohol - legally?

Sgt Andy Smith, Police National Coordinator of Alcohol Harm Reduction says that a number of changes have affected the laws around the supply of alcohol to minors, in particular what constitutes responsible supply.

“It is important that parents and organiser understand what those rules are,” he says.

"The safest way to put it is if you are going to have a part of that nature you have to consider yourself as the duty manager of your home."

KR: Is the onus on the person hosting the party to establish the age of those at the party?

AS: If I was hosting a party – I’ve got a teenage daughter and she wanted to bring her friends around and one of them turned up and said ”I’m 18” I’d certainly want to confirm that.’

KR: If someone wants to host one of these events at their home, or at a venue, legally what are the issues surrounding doing to people under the age of 18?

AS: Firstly you need express consent – from parent to parent. It’s more than a note from mum, it’s like an informal contract between the parent of the child who’s going to the party and the parent of the person who is hosting it. It’s about saying – look here is my child is under the purchasing age I’m happy for them to be at your party, I’m happy for them to consume alcohol in a responsible manner.

KR: What if young people without express consent turn up?

AS: Once you’re in an environment where you supply alcohol to a minor without that consent, that’s where you step over the line. You have to monitor who is at the party and turn people away at the door if they don’t have that consent.

KR: What is responsible supply?

AS: The standards for this are clearly laid out in the act. As a host you must:

KR: What about BYO, when people turn up with their own alcohol?

AS: If you are running a party with people who are under the purchase age, you will have to take that alcohol and take control of it, because otherwise they might distribute it on your premises.

KR: How would parents go about taking alcohol off young people? What practically do people have to do?

AS: In a practical sense the first element of what responsible supply would actually go before the party – you’d say “don’t be turning up with a bottle of vodka".

KR: What if a young person turns up and they have been preloading should you be assessing their level of intoxication?

AS: You want to introduce people to alcohol in a safe way, rather than encouraging them to have a “rip up’ party and binge drink. If you have that express consent prior to them arriving you will know who their parents are and the responsible thing to do would be to ring up and say “look your song or your daughter has turned up intoxicated, can you come and get them?”