Leicester City Football club has pulled  off one of sport's greatest fairy-tales, clinching the Premier League title after starting the season as 5,000-1 outsiders,

To put that in perspective the bookies thought there was more chance of finding the Loch Ness Monster than the Foxes' Premier League win. 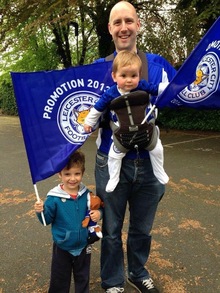 Leicester were handed the title after their nearest rivals, Tottenham Hotspur were held to a 2-all draw at Chelsea this morning, and cannot close the gap with two games to go.

The club , which struggled last season to stay in the Premier League, has never achieved such a feat in its 132-year history.

The Leicester Mercury's chief football writer & the author of the book 5000-1 The Leicester City Story is Rob Tanner.