Nick Tripe is a pear grower in the Mangamahu Valley, about 40km north-east of Whanganui. 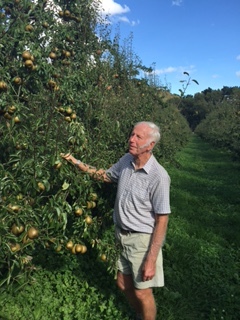 Read an edited snapshot of Nick Tripe and Kathryn Ryan's conversation below:

All pears are the same to me, and I have no idea what the most common pear is. It’s just grey and speckled on the outside and yellowish white on the inside. What variety is that typical, common one?

The traditional pears have been Bartlett, Nevis and coal –  the ones you’ve seen in the supermarkets for probably 50 years. And they’re generally presented to the public as either rock-hard or rotten, which gave pears a very bad image. Not many of us understand the ripening process for pears. You probably like a crisp pear, but a lot of people like a pear where you stand over the sink to eat it and the juice drips into the sink. That being so, the ripening process has to be completed, which involves four weeks or so in cool store. And then they fire up – to use the jargon – when you take them out and expose them to atmospheric temperature. So there are two pear eaters – one is the one who likes the hard pear, the modern variety. And one who likes the really juice one. And the really juicy ones require that ripening process which won’t happen on the tree, to get them really juicy and dripping down your cheeks.

What is the key to year-on-year producing a very good crop?