Has the war on drugs failed?

The war on drugs has led to "near record-level" failure, according to a visiting drug policy expert, who says imprisoning users is like "curing clinical depression with a baseball bat".

The United Nations General Assembly will soon hold a special session on the world's drug problem, where governments and NGOs will discuss the way forward.

Many in the drug policy field argue that decades of a punitive approach have not deterred drug use, and in fact have caused more harm - particularly to indigenous people. In this country, Maori are consistently over represented in prison for drug offences and more than 1.5 times more likely to use cannabis daily. 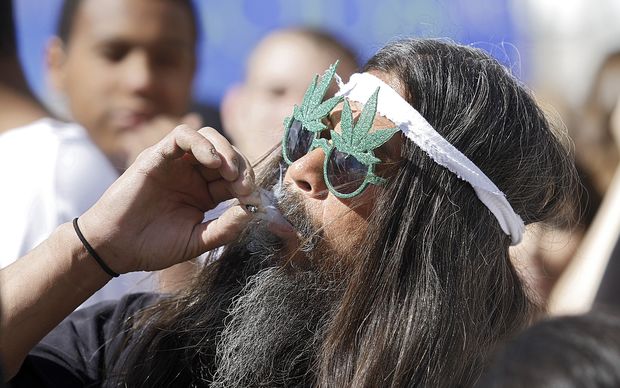 In the war on drugs, the stoners have emerged victorious Photo: AFP

Sanho Tree - the director of the Drug Policy Project for the Institute of Policy Studies in Washington DC - is in New Zealand as a guest of the Drug Foundation, and says drug problems will not be solved until poverty and alienation are addressed.

He told Nine to Noon that after four decades of the drug war, there was a clear winner.

"Well, we've spend well over $1 trillion fighting this war on drugs and the drugs are winning. If you look at the government's own indicators of success or failure, they measure the price, purity and availability of drugs - and drugs are cheaper to get, they're higher purity and they're more available than ever before. So we're near record levels of failure."

Listen to the full Nine to Noon interview here:

He said that even though many indigenous communities around the world had a long history of using different kinds of psychoactive substances without abuse, poor people and people of colour tended to be over-represented in terms of the punitive nature of the drug war.

"In the United States, african americans and latinos consume drugs at roughly the same rate as their relative size of the population, but if you look at the prison system, they're overwhelmingly over-represented, at every juncture, in terms of who gets arrested, who gets prosecuted, who gets convicted and who gets sentenced to incarceration."

This was compounded by the idea that it did not make sense to punish individuals for drug use, abuse or addiction.

"If you believe that drugs harm the individual, it makes no sense for the state to harm them even more by putting them in prison. It's a public health problem and we don't use coercion as a means for making people better. It's like curing clinical depression with a baseball bat."

Mr Tree said a regulated approach to drug use, as currently seen with cannabis in the United States, was a far more effective way at keeping drugs under control and out of the hands of children.

Many US states now have some form of decriminalisation of cannabis, which means it's not a criminal infraction and those caught using it get the equivalent of a parking ticket. Half the country has access to medical marijuana in some form or another, and now four states have legal recreational marijuana with some parameters. such as no public use and no driving, that sort of thing.

Mr Tree said the experiments in US drug reforms had worked "very well".

"It has raised a lot of tax revenue, it's kept it out of the hands of children, the sky has not fallen by any means. So the indicators are quite positive. Use has remained fairly stable, but it's still too early in the United States. If you look at the netherlands, for instance, they have been practising a form of quasi-legalisation for many years now, and across the board they have lower rates of cannabis use compared to the US, including amongst teens.

"The states in the United States are meant to be the laboratories of democracy, so we have 50 different models, and each one is going to experiment with a slightly different form of control. I personally prefer far stricter regulations, so the state of Vermont, for instance, may become the first state in the US to pass marijuana legalisation by legislature, where the politicians actually stand up and take a vote on this, and I think they are going to come up with a much better regulatory scheme than states like Colorado or Washington where it was a popular referendum."

While there were dozens of different methods of drug control underway in the States, Mr Tree said they all agreed something needed to done, with the country struggling under the weight of the biggest prison system on the planet.

"We incarcerate more citizens than any other country, including China and Russia, and that is overwhelmingly the result of the war on drugs policies. And there is now revolution in the US of many sorts - people are tired of the status quo, and one of those things is the war and our rates of incarceration."