What's it like to land a double back flip in a wheelchair?

Aaron Fotheringham, AKA 'Wheelz', is the only person ever to land a double back flip in a wheelchair. 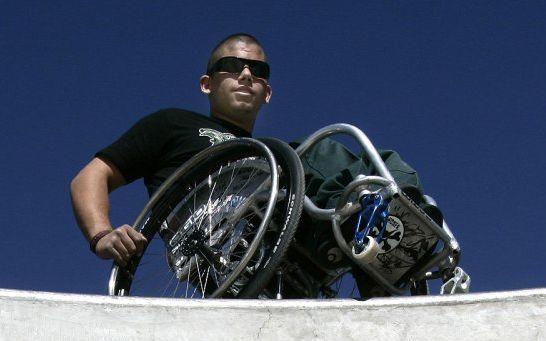 The 22-year-old native of Las Vegas, who has spinal bifida, went to his first skate park aged eight.

"Yeah I was eight years old and I crashed on my face pretty much the first couple of times and then finally I was able to roll away from it. And I was hooked right there, it was a lot of fun," Mr Fotheringham told Nine To Noon today.

Since then he's gone from strength to strength with progressively more difficult tricks. 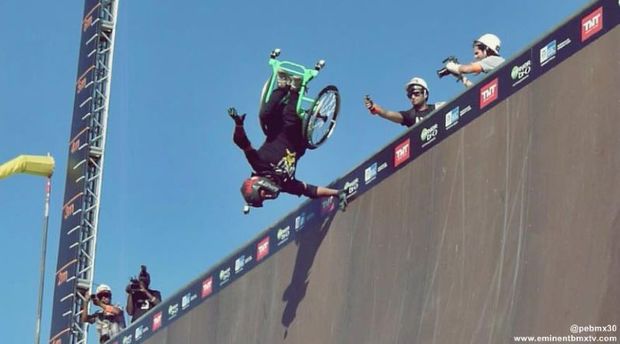 They include hand planting, mid-air 180-degree turns and death-defying front and back flips - some of which he perfoms live while touring with Nitro Circus.

There have been plenty of spills to go with the thrills, but that's the price you pay in wheelchair motocross, Mr Fotheringham said.

"There's a lot of ups and downs for sure, but all the times you crash are definitely worth it when you finally land it that one time you know?" he said. 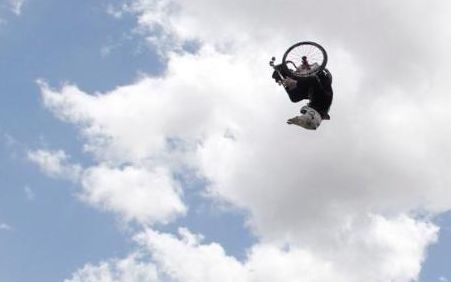 "I'm just grateful I've never broken a bone or anything, just my teeth."

"I've never been, I would say, fearless... I'm definitely feeling a lot of fear, I just think it's all in how you manage it. You've got to not do something you're not ready to do but also calculate it a little bit."

Wheelchair motocross is just as dangerous as freestyle skateboarding, he said - or perhaps more dangerous.

"With the chair, you can't really bail. So if you're going up a ramp and you don't make it to the top, you're going down with the ship!"

But Mr Fotheringham actually took most of his inspiration for his tricks from BMX freestyle, rather than skateboarders.

"Just more similar with the bigger wheels... I just took a lot of things from both the different sports and just tried to figure it out on the wheelchair."

His specially-designed wheelchair has suspension on it, with two shocks underneath the bigger back wheels while the two front wheels also have some suspension.

And he needed the shocks when he landed the world's first-ever front flip in a wheelchair - in Wellington.

"That was so much fun. We actually came back the next year and I was like, 'oh, I want to top that, I want to top that'. And I went for a double back flip and I landed completely upside down on my head - and I don't remember much of that show!" Mr Fotheringham said.

"Whenever you have a bad crash it definitely is a reality check, but I've never been to a point where I was sitting in a hospital and was thinking to myself, 'wow, I should stop riding'."

Listen to Aaron Fotheringham on Nine To Noon