Young UK based Afghan political refugee aims to be President 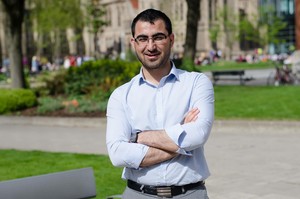 Gulwali Passarlay is a young political refugee living in England, who would like to eventually be the President of his homeland.

He left his home in East Afghanistan nine years ago aged 12. His famly were pro-Taliban, and he was raised to hate the West.

It was a treacherous journey through 10 countries to reach Britian, where a family fostered him, he completed school, and gained a place at University. He has become an advocate for refugees, he is a Young Labour representative and the President of the United Afghan Peace Movement.

There's  also a book about his escape to a new life called The Lightless Sky.

At 21, Gulwali Passarlay has big plans and aspirations, including returning home to Afghanistan to run for the Presidency.