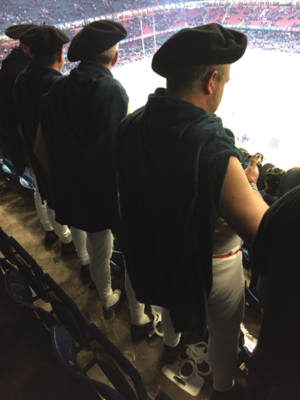 The All Blacks will meet South Africa in the semi-finals at Twickenham in London next weekend, having crushed France 62-13 in Cardiff. The defending world champions racked up more points in the 62-13 thrashing, than any team has ever scored against France to set up a semi-final against the Springboks.

And... for the first time, all four semi-finalists are from the southern hemisphere after South Africa, New Zealand, Argentina and Australia all won their quarter-finals against opponents from the north. So it's New Zealand versus South Africa and Argentina vs Australia in the Rugby World Cup semi finals.

Anton Oliver was in the crowd at the Millennium Stadium for the All Blacks' incredible match.