The sea of unrecyclable bottles clogging a Southland quarry 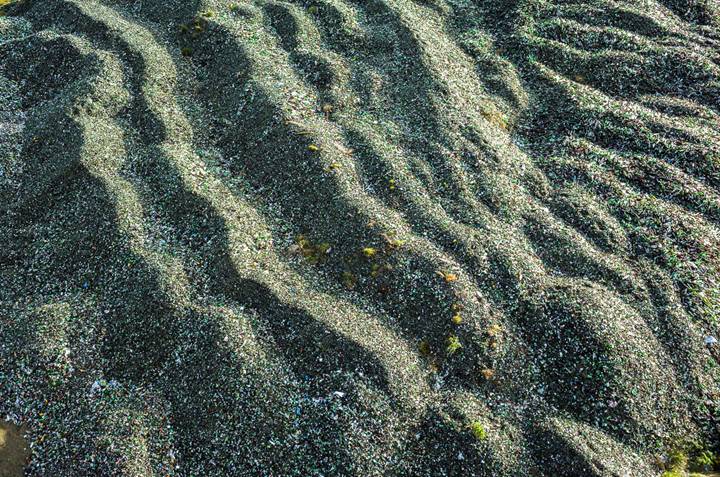 Tens of thousands of bottles, spread like sand dunes across a quarry in Invercargill. Photo taken for New Zealand Geographic by Jason Hosking.

From above, it looks like an alien landscape, rolling dunes of green and brown, with some hardly plants managing to force their way through the broken glass.

There are tens of thousands of bottles in this Invercargill quarry, stockpiled there because they cannot be recycled as they are too colour mixed and contaminated.

There's only one bottle recycling plant in the country, OI in Auckland. It takes glass from recycling schemes around the country, but only where the glass collection is separate from other recycling. In Southland the recycling is mixed, which means OI won't take their glass due to contamination.

The director of Invercargill's recycling contracter, Southland DisAbility Enterprises, Ian Beker says even if OI would take the glass in Southland, the cost of freighting it there is not economic. He told New Zealand Geographic that the best thing Southlanders could do is put their bottles into the general rubbish bound for the landfill.

John Webber of the Glass Packaging Forum says the last thing he wants is for glass to go to the landfill, as it is infinitely recyclable. New Zealand recycles 72.6 percent of the glass that is sold in the form of bottles and jars. It would be higher, he says, if all councils required bottles to be collected separately.

He admits that transport costs are an issue for smaller centres far from Auckland, but points out that Dunedin successfully collects 100 percent of its glass for recycling in Auckland. He understands that 200 tonnes of glass bottles a month continues to be stockpiled in Invercargill.

Like Invercargill, our biggest city Auckland also allows for co-mingling of glass with other recyclable materials. John Webber says that means most of the glass recycled at the OI plant in the city comes from other regions, not Auckland.

John Webber says there are mountains of bottles in other parts of the country, but they will eventually be crushed for use in roading.