Outdoors man and adventurer Kennedy Warne discovers some hidden lakes around the country. He speaks to Nine to Noon's Kathryn Ryan from Golden Bay. 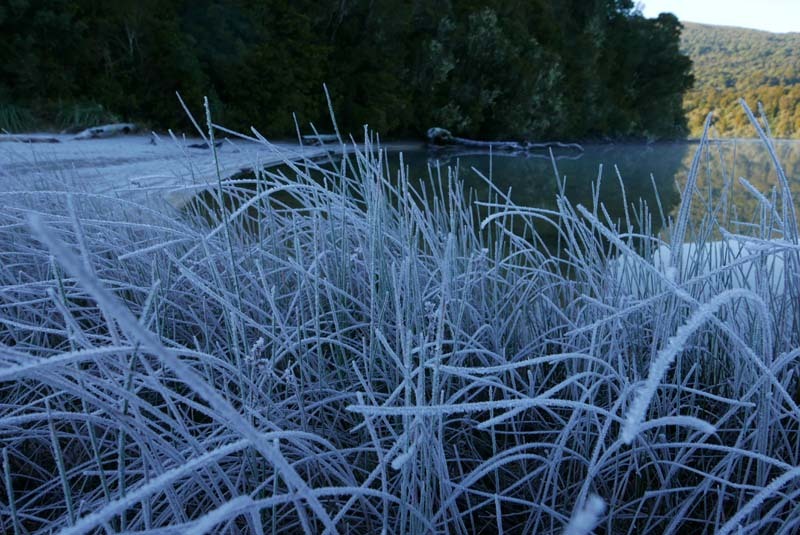 Ice on lakeside grass on a frosty morning at Lake Rotopounamu, in Tongariro National Park 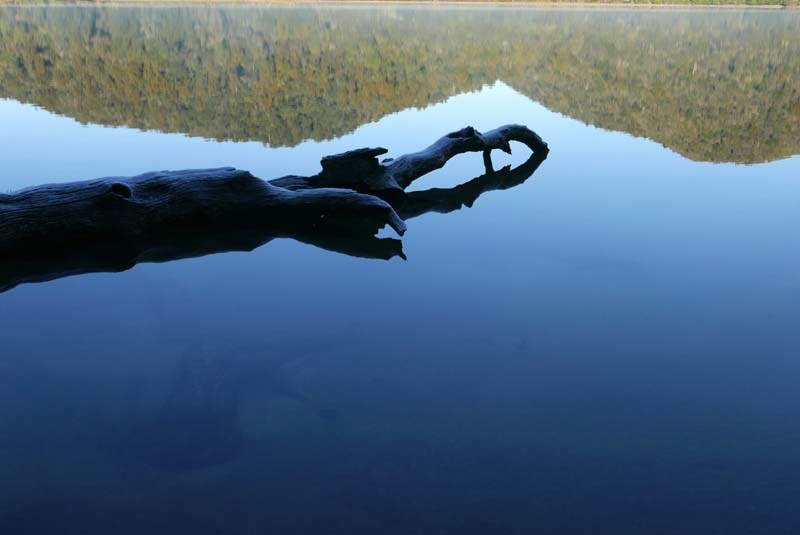 Log extends a finger into the mirror calm of Rotopounamu 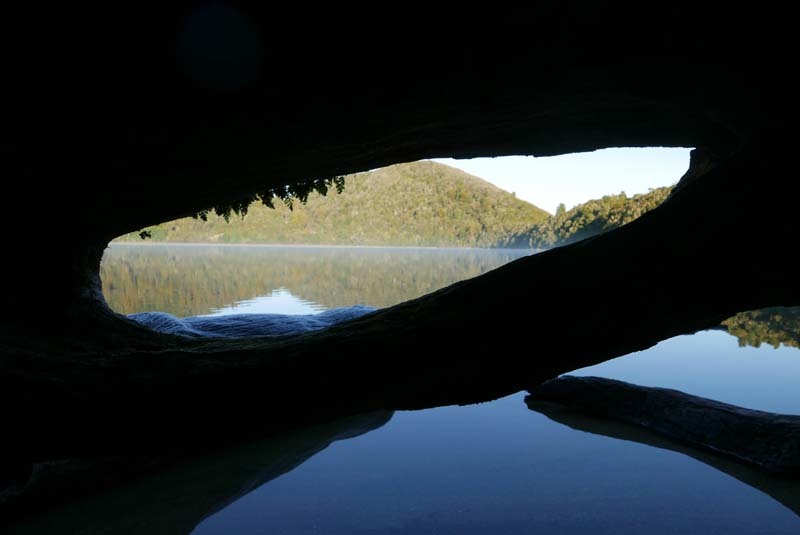 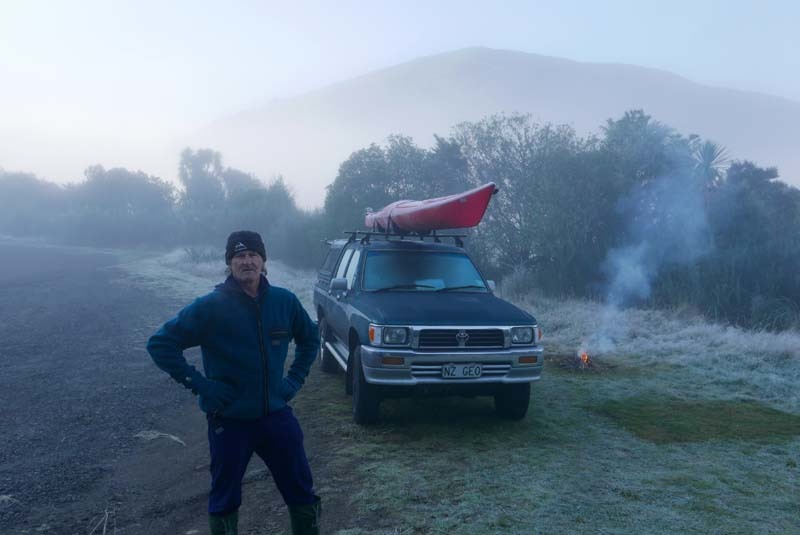 Winter's morning at Opotaka, a former kainga on the shores of Lake Rotoaira 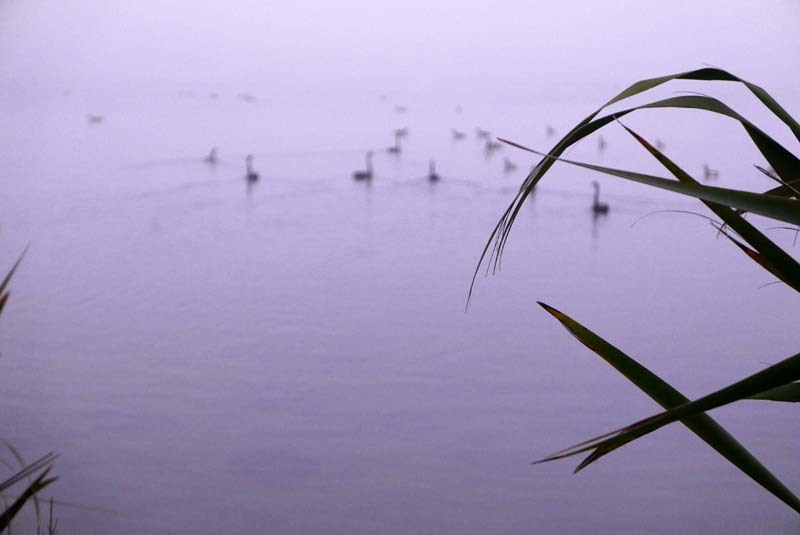 Waterfowl on the fog-shrouded waters of Rotoaira 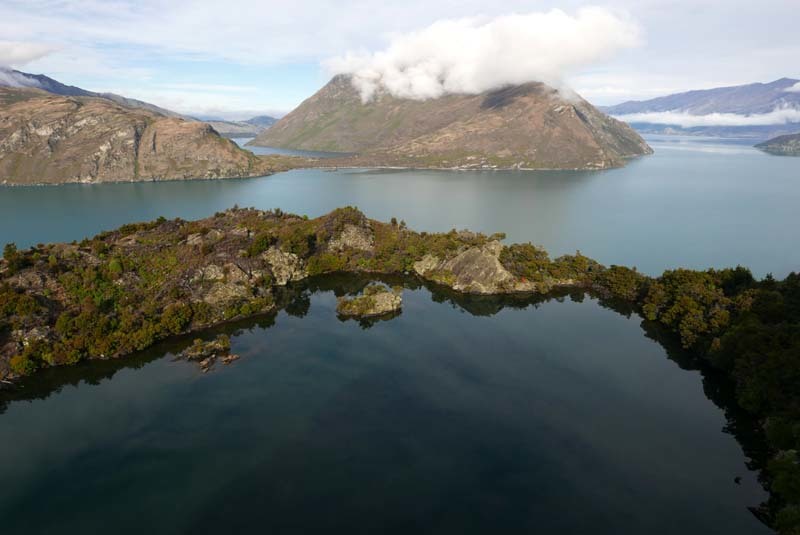 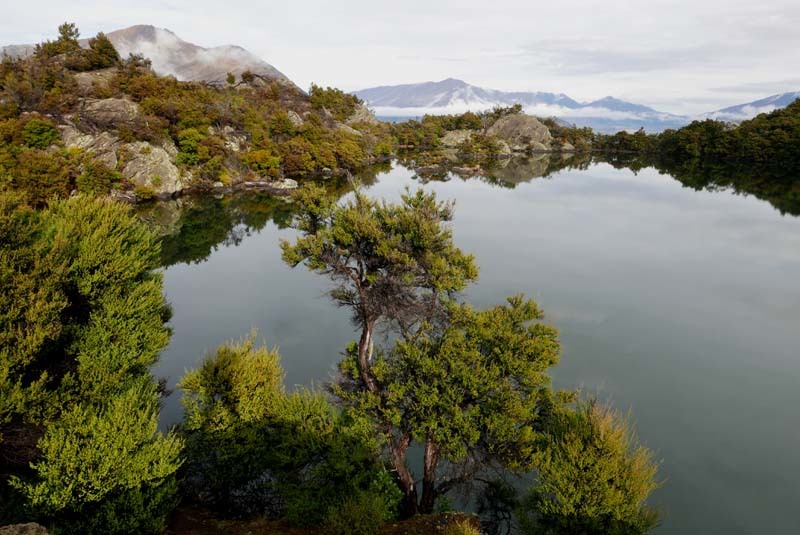 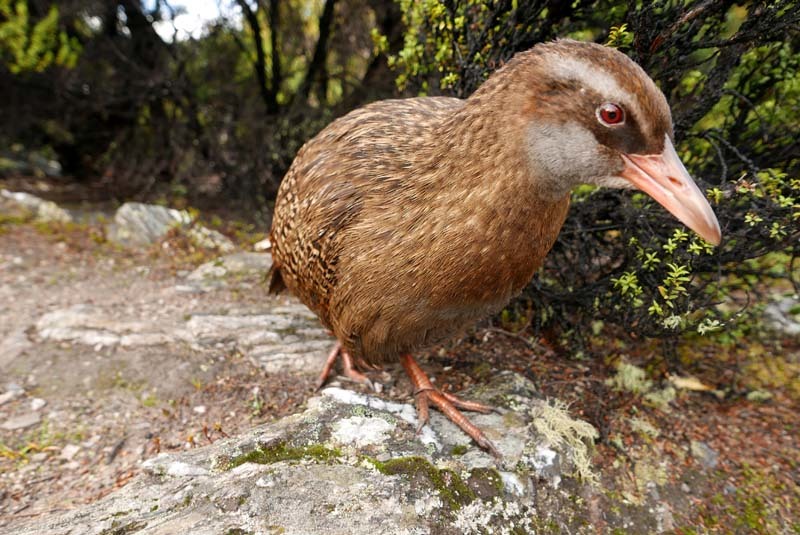 Buff weka have been introduced to Mou Waho 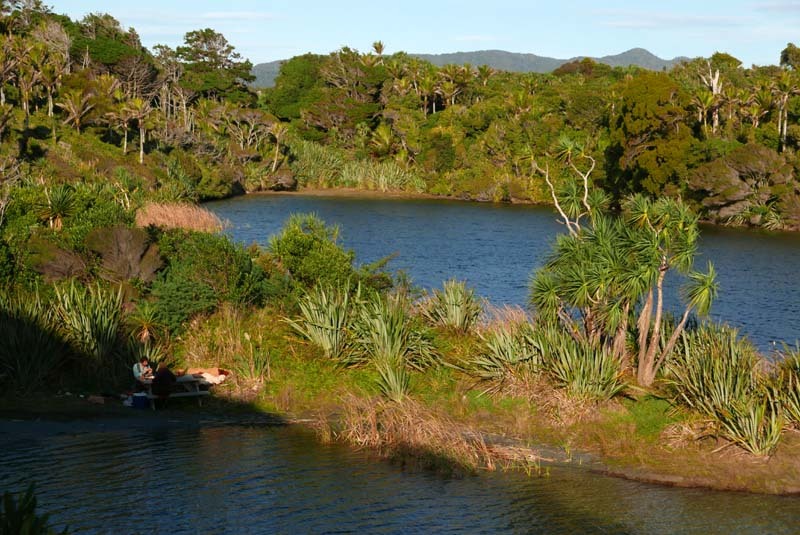 Picnickers enjoy the solitude of Tinawhu, one of the two Kaihoka lakes of Golden Bay 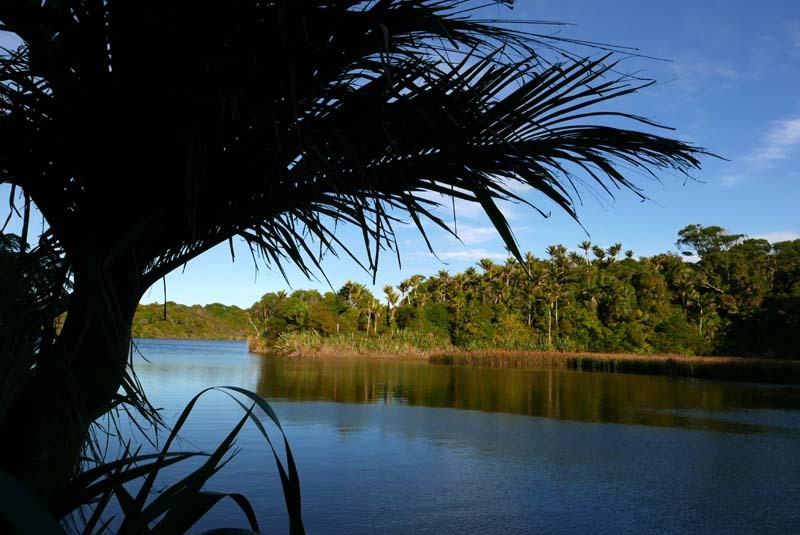 Nikau frames raupo and forest on the shores of Tinawhu 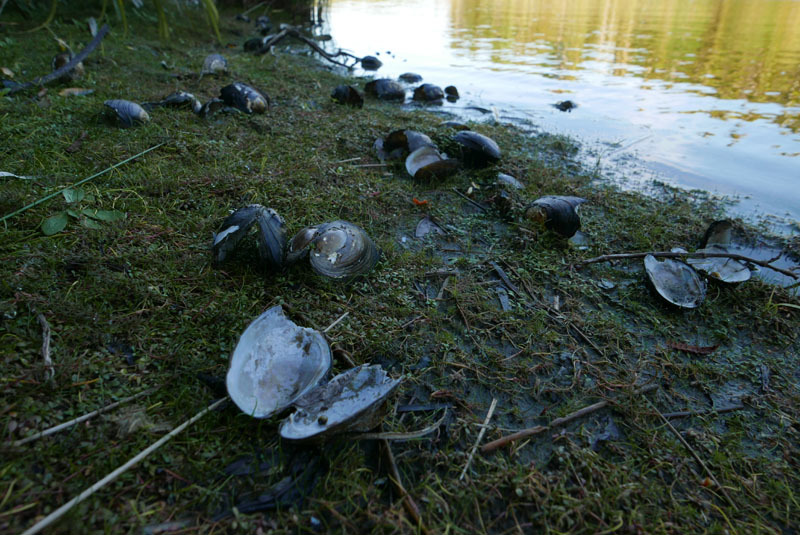 The Kaihoka lakes are known for large freshwater mussels 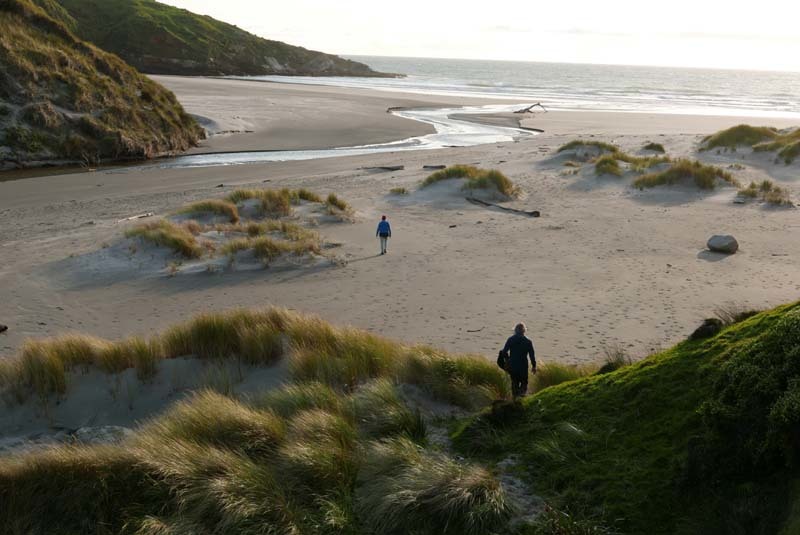 The western shoreline of Golden Bay is a dramatic, secluded coast 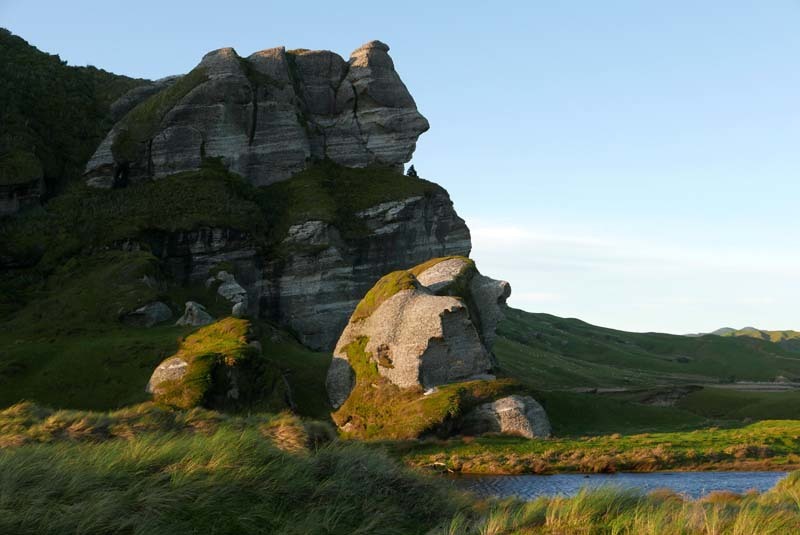 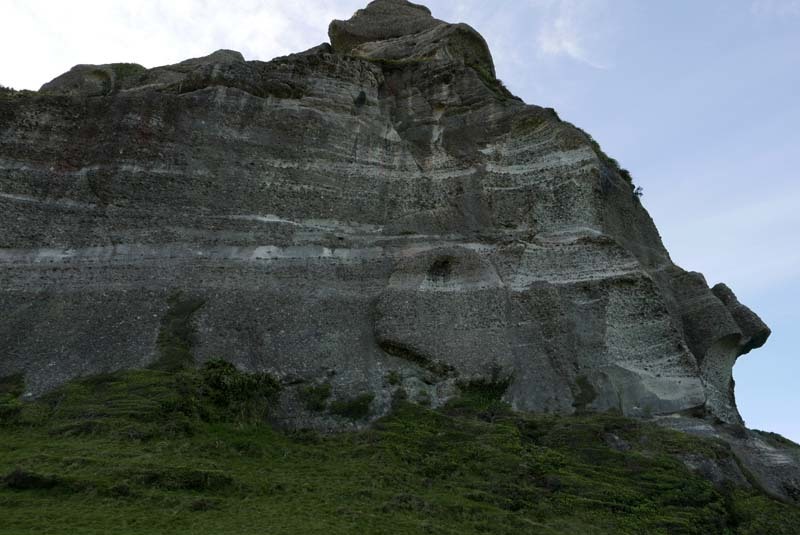 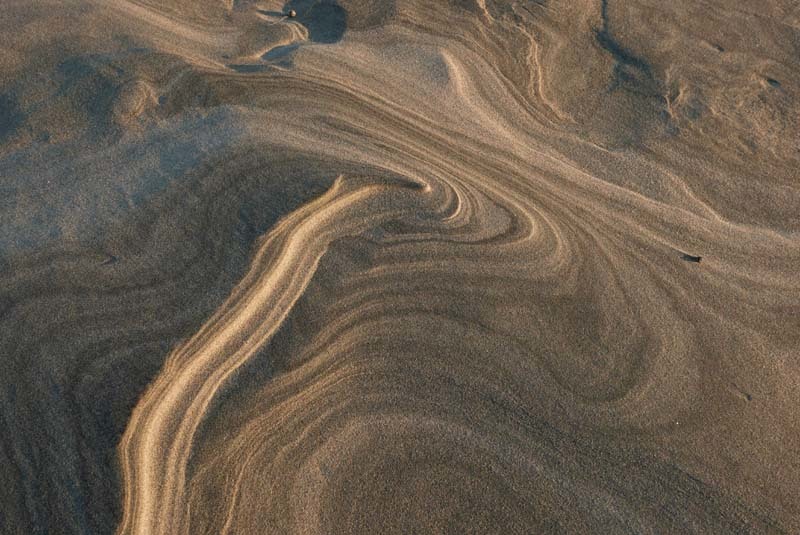 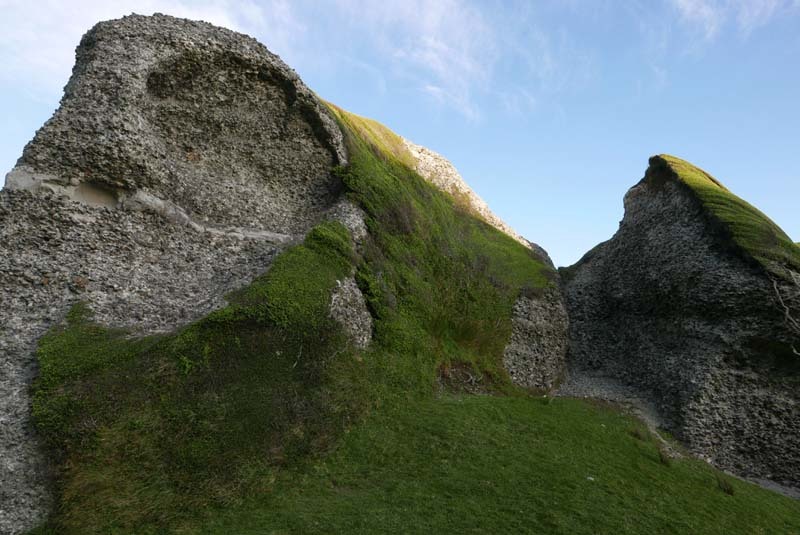 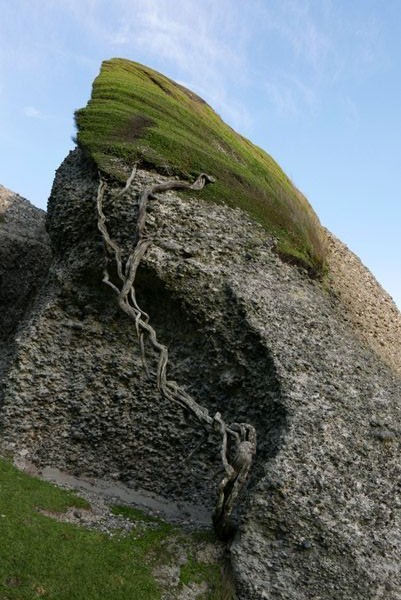 Gnarled trunk leads to a scalloped canopy in this coastal plant, plastered against a rock stack. 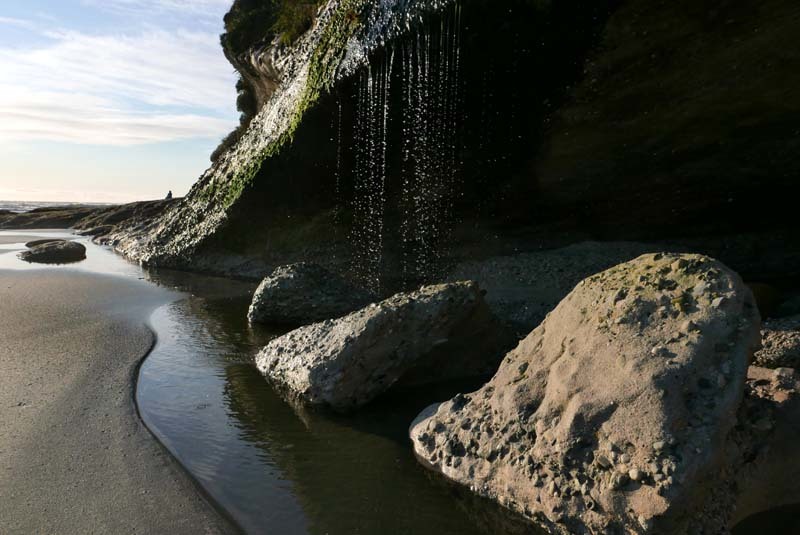 Gentleness on a high-energy coast: water drips into a pool with the Tasman breakers beyond

Who said these words?:

“Any time I feel lost, I pull out a map and stare. I stare until I have reminded myself that life is a giant adventure. So much to do, to see.”

Would you believe Angelina Jolie? Yes it was, and I don’t think she was referring to a map of clothing boutiques in Milan.

As I planned a road trip from Auckland to Otago, I consulted online topo maps to look for some off-the-beaten-track locations to visit, and noticed several hidden lakes. One was Rotopounamu, a jewel of a lake in Tongariro National Park. To reach the lake is a 20-minute walk through gorgeous forest, a walk I made both at night and during the daytime, to get the feel of the place.

Rotopounamu (“greenstone lake”) lies at the foot of Pihanga, in Maori tradition the wife of Tongariro. It was formed by a massive landslide around 10,000 years ago. On a frosty winter morning the shores of the lake were white with ice and the edges of the mirror surface of the lake had ice “leaves” jutting into the water. A place of deep seclusion near the main road to the skifields.

Just along the road from Rotopounamu is Rotoaira, a place of great history, including the origins of the All Black haka 'Ka mate'. An island in Rotoaira, called Motuoputhi, was a fortified village of Ngati Tuwharetoa, a place of refuge during tribal attacks.

'Ka mate' had its origins during a period when the southern chief Te Rauparaha was being pursued by his enemies. Motuoputhi’s rangatira, Te Wharerangi, sheltered the fugitive in a food storage pit, placing his wife over the entrance. Te Rauparaha’s enemies were unable to find him, and concluded he must have fled. When his pursuers left, Te Rauparaha emerged from the pit and expressed his thanks by writing the chant 'Ka mate'. The words “I die, I die, I live, I live” take on great meaning when you consider the context.

On the shore near Motuoputhi is Opotaka, a kainga of Ngati Tuwharetoa occupied in the 1800s and now restored as a historic reserve. Opotaka was a resting place for travellers between Taupo and the Whanganui River, and in keeping with that purpose I pitched my tent and spent an icy night in this place of history and alpine beauty.

My second hidden lake required a kayak trip on Lake Wanaka. Mou Waho, which literally means “outer island” is the largest of four significant lakes in Lake Wanaka, and is a scenic reserve. It took me two hours to paddle in gentle rain on a windless day from the outlet of Lake Wanaka, where it becomes the Clutha River (Mata-Au), to Mou Waho.

The island is 2km long, and rises 200 m above lake level. Its most significant feature is Arethusa Pool, or Moutimu, a 150 m-long lake-within-a-lake. Arethusa is the name of a nymph of a sacred spring on an island off the coast of Sicily. There are small islands within the lake. According to an information panel beside the lake, these are “islands in a lake on an island in a lake on an island in an ocean.” The pool was scoured out by glacier ice when the entire area of Lake Wanaka was filled with ice about 15,000 years ago. The lake is 150 m above the level of the surrounding Lake Wanaka.

Hard to believe for such a small island, but Mou Waho was once used for boat building—wooden schooners for the lake trade—and sheep grazing. The island was a favourite stretch-the-legs stopping point for steamers plying between Wanaka and the head of the lake.

In recent years there has been an active ecological restoration programme on the island, including the introduction of buff weka, which were wiped out by fire in the late 1800s. Buff weka are one of four subspecies of weka, and went extinct in Otago. It was re-introduced from the Chathams in early 2000s.

The island is also a haven for a species of large ground-dwelling weta, the mountain stone weta. They can survive in temperatures up to minus 10 degrees C. More than 80% of their body fluids can freeze without any ice forming in their cells.

In what could be seen as a comedy of errors, it turned out that the weta was a prey item of the weka. Weka v weta, you could say. So with the help of students from the local Mt Aspiring College, DoC built dozens of weta “motels” to give weta a safe haven. The project is said to have been an exceptional success, with gecko also enjoying occupancy in the “rooms” in the motels.

My final off-the-beaten-track lake is actually a pair of dune lakes near Whanganui Inlet, in Golden Bay, near Farewell Spit. These two lakes, Tinawhu and Whupa, are together known as the Kaihoka Lakes. A road passes beside one, but the second is hidden and requires a 15-minute walk through native forest to reach it.

The lakes are ecologically important for their landlocked populations of banded kokopu and their unusually large freshwater mussels. I found many mussel shells on the lake shore, and presumed by their broken tips that birds (perhaps shags) had eaten them.

Across farmland from the lakes is the dramatic west coast, with impressively statuesque rock formations, patterned sand dunes, wind-shaped vegetation and utter solitude. A phone call to the local farmer is needed for permission to cross sheep and beef paddocks, where a strange sweet smell was tracked to piles of kiwifruit being fed to cattle—apparently a high-energy stock food to give quick weight gain.

Gemlike lakes and a wild coast—a great combination for an afternoon’s adventure in Golden Bay.

Consult your map for adventures unlimited.