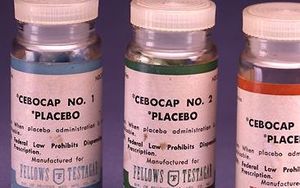 Why are some of us predisposed to respond to a sugar pill if we believe it is a medicine?

New research has shed light on just why placebos work so well on some, and not others. And it all comes down to our genes.

A placebo can be anything from a sugar pill to the decor of your doctor's office, such as the degrees on the wall, the white coat, and whether or not they wear a stethoscope. It all depends on how it makes us feel, which in turn can reduce sensations of pain.

Kathryn Hall of Harvard Medical School has studied the history of placebos and how they work in the brain.

She says studies on patients being given morphine for pain show how effective our endorphins are in dealing with pain "If the patient was not able to see when the morphine was administered morphine was not as effective as when they could see someone administering it".

She and her team at Harvard realised neuro-imaging studies showed dopamine was released in response to the administration of a placebo in key areas of the brain associated with reward pathways. And she says opiates also activated when people anticipated some kind of relief.

"So we wanted to start to look for genes that might be associated with different levels of dopamine or opiates in the brain, genetic variations in key neurotransmitters affected ability to respond to placebo"

They studied patients with irritable bowel syndrome. Some received a placebo, and others sat on a wait list without treatment.

Those with a type of gene related to the release of dopamine in the brain, known as COMT, had a bigger reduction in pain symptoms on the placebo. The difference was even higher when doctors were extra nice to the placebo patients receiving fake treatment.

She says it was strikingly obvious that those with more dopamine have a much bigger placebo response.

Kathryn Hall spoke with Kathryn Ryan on Nine to Noon.