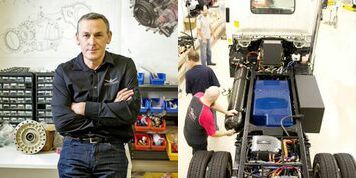 Ian Wright is a New Zealander engineer who co-founded Tesla Motors with Elon Musk in 2003. But he left after a year to focus on creating a super-fast electric car, which he did, and in recent years has turned his attention to electrifying trucks.

His company Wrightspeed, based in California has converted medium to heavy trucks for Fed Ex and is now applying its technology to heavy-duty rubbish trucks. Ian Wright believes that cleaning up commercial and industrial fleets will make a bigger difference to pollution and fossil fuel problems, than getting commuters into electric vehicles.