Dilbert creator Scott Adams, on office politics and why "goals are for losers"

Newspaper readers around the world know Dilbert, the comic strip based around the office worker, only too well.

Dilbert was first syndicated in 1989 and appears in around 2000 newspapers.

They are so popular that creator Scott Adams gets hundreds of emails a day from readers, many of whom point out how eerily similar his comic strips are to their workplaces. They share their own stories with him, some of which end up in his cartoons.

Adams was initially a white-collar office worker in big US companies. "About 60 percent of my job at Pacific Bell was trying to look busy," he said in his 2013 book How to Fail at Almost Everything and Still Win Big: kind of the story of my life.

"I was in charge of budgeting ... most of my budget spreadsheets had formula errors but that didn't matter because all the inputs from the various departments were complete lies and bullshit ... It was a truly absurd experience." 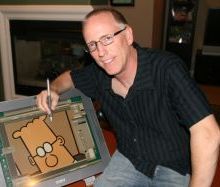 Many characters were based on people he worked with. The menacing triangular haired Alice is based on a woman who made people cry in meetings; the socially inept Wally a person who worked in the cubicle behind him at one office.

Dilbert has made Adams a multi-millionaire, but he says the biggest contributor to that success has been failure.

He set out in his book why he believes goals are for losers and passion is overrated.

"Goal-oriented people exist in a state of continuous pre-success failure at best, and permanent failure at worst if things never work out."

Adams told Nine to Noon that systems, rather than goals, improve the odds of success.

"A goal used to make sense when times were simple. If a farmer said 'I am going to clear that field by the time it snows', that was probably a good idea.

"But today if you say 'I'm going to be a' ...whatever career decision you say, chances are in five years that's not even going to be a good idea. So your best bet might be to just improve your odds in a variety of ways that you know are valuable wherever you are," he told the programme.

"If I look at the arc of my own life I went from the worst possible odds, which is poor kid in tiny town, through slowly improving them through logical means."

In his book, Adams details his many failures, and how it was his persistence that lead to his success.

"I'm a perfect example of the power of leveraging multiple mediocre skills. I'm a rich and famous cartoonist who doesn't draw well."