Sorry to all the working mothers 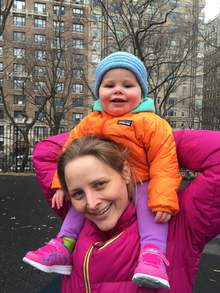 Katharine Zaleski was a high flyer. She worked hard, put in the hours and rose to the top of several major US media organisations including Huffington Post and the Washington Post.

She had little time for working mothers, because she believed they weren't really committed to the job and were too focused on their children. That is, until she gave birth to her own child.

Earlier in March Katharine Zaleski wrote an open letter, published on Fortune.com, in which she admitted she was horrible to working mothers and offered an apology.  The letter went viral and has brought the issue of work-life balance to international attention.

The op-ed details just how far her bias went, she even dismissed the work ethic of the managing editor of Time.com when she went to pitch a partnership idea.

"Once I took a seat and surveyed the endless photos of her small children spread across the airy space, I decided this editor was too much of a mother to follow up on the idea."

She said she silently slandered mothers throughout her career and remained quiet when others challenged a woman's work ethic because of her family status.

Everything changed when she had a daughter of her own. She felt her career was over, and that she faced only two choices: give up all that she had gained or go back to work like before and never see her baby.

Instead she found a third option. She launched a company to match women in technical positions they could do from home, PowertoFly.

"By enabling women to work from home, women could be valued for their productivity and not time spent sitting in an office or at a bar bonding afterwards."

So far the start up has processed over a million US dollars in paycheques for women who work from home in five continents.

But she said working from home wasn't the final answer and a lot more needed to change. She told Fortune.com that "there is a systemic problem in society, younger women don't recognise the value of working mothers, because they measure the hours spent at the office not the quality of the work".

She has been criticised for the fact she only realised how unfair she had been once she had a child of her own,  to which she responds: "empathy is a great teacher".

Katharine Zaleski spoke with Kathryn Ryan on Nine to Noon.