It's like a "missile" and our scientists have been using it to study two undersea volcanoes in the Kermadecs. 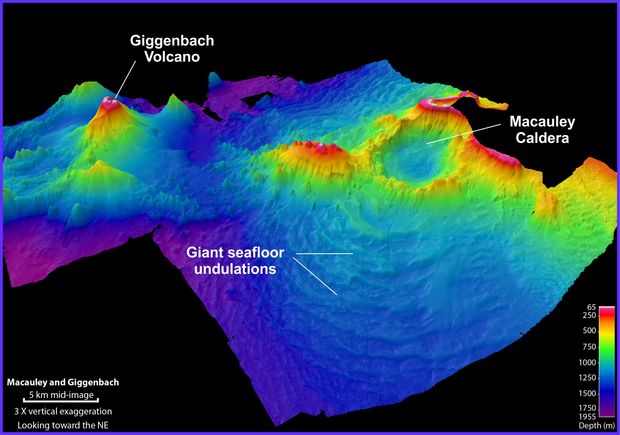 Macauley and Giggenbach volcanoes in the Kermadec Arc off Bay of Plenty Photo: GNS

Sentry is a 1.25 tonne, battery-powered vehicle capable of diving to 6,000 metres below the ocean surface. It has four pivoting wings with a propeller on each and can skim over seafloor terrain at any height. It is equipped with about a dozen sensors to measure physical and chemical parameters of the ocean and seafloor. 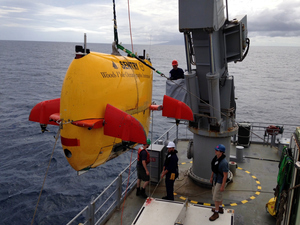 Sentry being launched/retrieved from the Navy patrol vessel Wellington during the recent voyage to the Kermadecs. Photo: GNS

Cornel de Ronde, who lead the GNS Science team, said Sentry was like a missile: you could program it to go where you wanted.

The device was borrowed from US-based Woods Hole Oceanographic Institution.

"There isn't one in the southern hemisphere, but we want to get one," de Ronde said.

The team was able to confirm there was a cone the size of Mt Eden sitting inside the Macauley crater, which is very active.

"What we are finding is that many of our offshore volanoes are hydrothermically active, which gives us a modern laboratory to study how these hot springs work under the water, the deep-sea habitats and mineral deposits," de Ronde said.

Unfortunately the expedition as cut short by Cyclone Pam, and the team had to return to shore much earlier than planned.

GNS has been working for many years to map and understand tracts of seafloor off our coast. New Zealand has sovereign rights over an area of seafloor totalling 5.7 million square kilometres 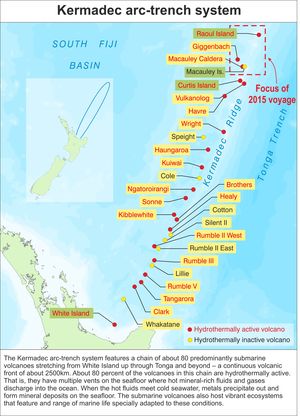 * The Macauley Caldera is an oval-shaped submarine crater about 10km by 5km, or about the size of Wellington Harbour. It produced a major eruption about 2000 years ago.

* The crater has steep walls and numerous sites are venting hydrothermal fluids. A young cone that has grown up inside the crater is extremely vigorous. An unusual feature of Macauley are giant sand waves or seafloor undulations that extend outwards for many kilometres on the flanks of the caldera. These features have been observed at only a handful of submarine volcanoes worldwide.

* Giggenbach is a simple cone volcano similar in size and style to Mount Ngauruhoe. It is located 800km northeast
of the North Island and about 30km from Macauley Caldera.

* It is shallower than most submarine volcanoes with its summit about 120m below the sea surface. During a 2005 expedition, scientists found diffuse hydrothermal venting around its summit.

* The feature that sets Giggenbach apart is the huge volume of carbon dioxide discharging into the sea from one particular vent area.

* Scientists know of only one other submarine volcano in the world - NW Eifuku volcano in the Mariana Arc - that is venting more carbon dioxide than Giggenbach.