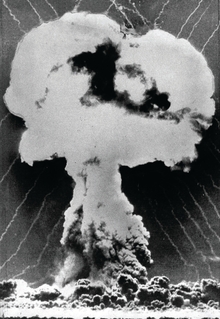 Soldiers were made to walk through the fallout with no protection. Pilots were ordered to fly through the mushroom clouds. Navy personnel witnessed atomic explosions from boats.

More than 20,000 British and Australian servicemen, as well as some from New Zealand, Fiji and Canada, were ordered to be exposed to the fallout from the nuclear tests conducted at Monte Bello Island, Emu Field and Maralinga in central Australia.

The purpose was to determine the effects of radiation on humans. They were never told of the dangers.

Australian journalist Frank Walker has interviewed many of the survivors, and scoured through military documents for his new book Maralinga:The Chilling Expose of Our Secret Nuclear Shame and Betrayal of Our Troops and Country.

He talks to Kathryn Ryan about the terrible impact on the soldiers – many of whom died of cancer, and fathered children with serious birth defects.