09:05 Interim report finds no need for moratorium on fracking but concern about regulatory environment

Evaluating the environmental impacts of fracking in New Zealand: An interim report (pdf)

09:30 Are we doing enough to prevent rheumatic fever in some of our most at risk populations?

The Australian Prime Minister is under fire as parliament sits for its final week of the year.

Sara Parkin is a founding director of Forum for the Future. She has campaigned for the environment and sustainable development in various roles for over 40 years, including playing leading roles in the UK Green Party and international green politics during the 1970s and 1980s. In 2001 she was awarded an OBE for her services to education and sustainability and has been brought to New Zealand by the Sustainability Society in partnership with Morphum Environmental. She is in New Zealand as part of the Auckland Conversations lecture series and will be speaking tonight at University of Auckland.

Travel writer Karen Goa and her husband travel across their native Canada after 20 years enjoying the New Zealand good life.

Artist of the Week - Graham Parker & the Rumour

The importance of Courts.

The work of American Martha Rosler and White Fungus project The Consumers of the Future, both the subject of two small exhibitions at the Adam Art Gallery on until end of January. 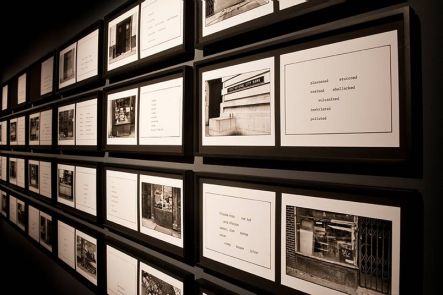 Installation view of Martha Rosler's The Bowery in Two Inadequate Descriptive Systems (1974-75) at the Adam Art Gallery. Series of 45 gelatin silver prints of text and images on 24 backing boards, each backing board 300 × 600 mm. Photo: Robert Cross.