Ralph Bungard, resident of red-stickered home in Avoca Valley; owner/operator of Three Boys Brewery; Joe Bennett, writer who is refusing to move out of his red-stickered home in Lyttelton. Ralph and Joe both live in white zoned areas but their houses are red stickered because of risk of rock fall - so they're not allowed to live in them, but are staying put despite the threat of eviction form the council.

See before and after of re-touched images 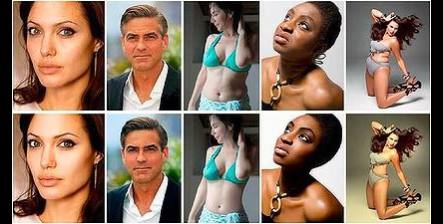 From left to right, photographs show the five levels of re-touching in a system by Hany Farid of Dartmouth.

Ten years ago (5 December 2001) sporting and adventure hero Sir Peter Blake was killed by bandits at the mouth of the Amazon River. In this intimate account, Sir Peter's wife Pippa offers an intensely personal account of their life together.

The Wine of Solitude by Irene Nemirovsky
Published by Chatto & Windus

We meet our narrator, Ches, a blind professor, who has been called by his former student Lawrence as an expert witness in the trial of Huey Dunstan, a young man who is accused of murder.