Nine To Noon for Friday 9 September 2011 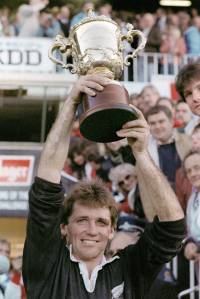 09:05 The only World Cup-winning All Black captain David Kirk on the start of the 2011 tournament.

David Kirk was the captain of the All Blacks when they won the inaugural Rugby World Cup in 1987. He discusses talks the chances of NZ chalking up a second victory in one of the world's largest sporting tournaments and how the game has evolved during the Cup's 24 year history.

09:25 Is the number of people smuggling drugs internally into NZ on the rise?

Six months on from the earthquake and tsunami in Japan and the Chinese government has just introduced new guidelines on how to provide first aid to the elderly.

Legendary NZ band Hello Sailor are being inducted into the NZ Music Hall of Fame. They will be honoured at the APRA Silver Scroll awards on Tuesday 13th September at the Auckland Town Hall.

10:45 Book Reading: How To Watch A Game Of Rugby by Spiro Zavos

Today, the rise of women's rugby, the tribalism at the heart of rugby watching and finally, immortality and eternity in the game.

Track: What If It Isn't Out There?
Artist: the Silver Seas
Album: Chateau Revenge
Composer: Tashian
Label: The Lights Label

11:45 The Week That Was with Radar and Elisabeth Easther